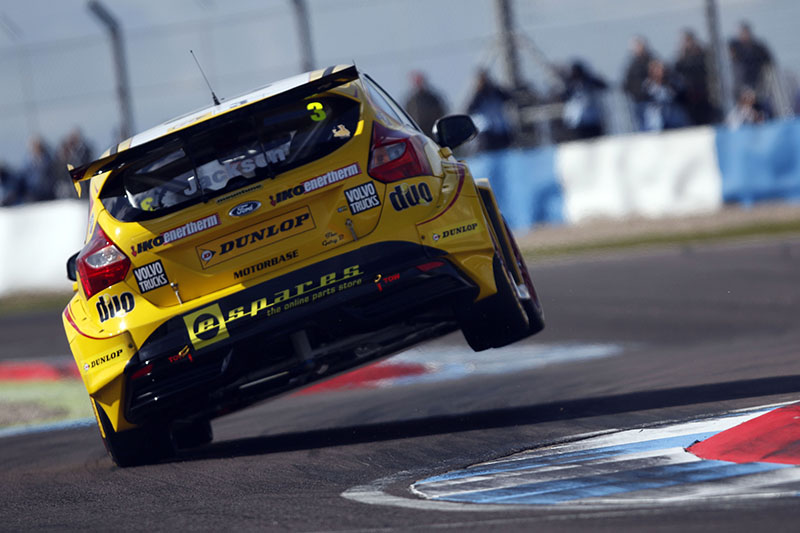 The Wrotham-based outfit showed flashes of pace on the Leicestershire circuit during throughout the Easter weekend meeting. However, Mat Jackson’s forced early retirement from races 2 and 3 left the team reeling, with Jackson securing just five points from Sunday’s opening race; a reward undeserving of the team’s on track efforts.

Having battled his way from 18th on the grid, Jackson’s opening race showed promise with the 35-year-old weaving his way through the field to eventually bring the #3 Focus ST home in 11th place. Race two proved to be a short-lived affair with a heavy opening lap shunt forcing Jackson off track, resulting in his first DNF of the season.

Torrential rain arrived in time for the final race of the day. Starting from dead last on the packed grid, a trademark lightening start off the line from Jackson saw the #3 Focus move up 5 places before a red flag brought the racing to halt. Unbelievably, yet more bad luck awaited the Shredded Wheat Racing with DUO’s racer after the restart when he was once more fired off into the barriers at high speed by Simpson’s errant Honda Civic on the opening lap; causing significant damage to the #3 Focus ST and recording Jackson’s second DNF of the day.

Luke Davenport celebrated his highest placed finish to date in race 2 with an outstanding drive that saw the 23-year-old make up 16 places from 32nd on the grid – narrowly missing out on collecting his maiden BTCC point in the #300 Focus ST.  Sadly; it was a weekend to forget for team-mate Martin Depper. Race-ending contact on the opening lap of the weekend defined the Midlands-based driver’s run of bad luck, and the #30 Focus recorded a disappointing 25th place spot in races 2 and 3. 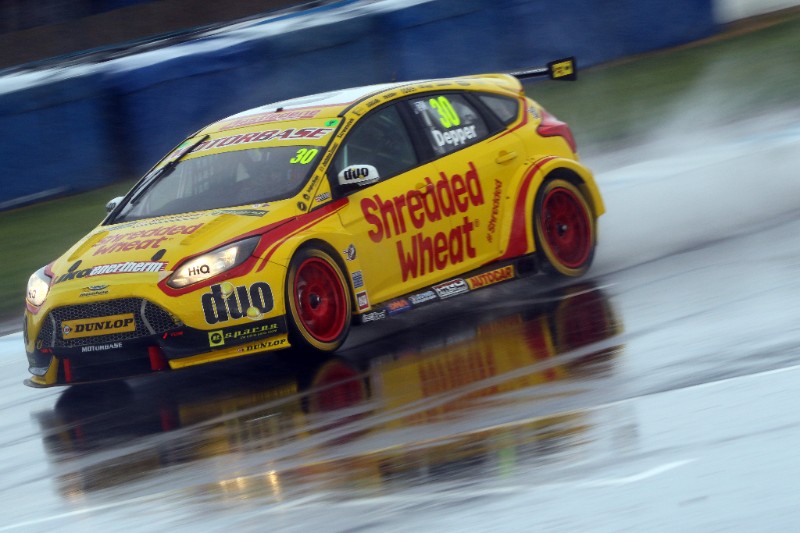 David Bartrum, Team Principal for Team Shredded Wheat Racing with DUO said; “You’d have to go a long way back in Motorbase history to find two DNF’s for Mat Jackson. Unfortunately our qualifying performance was compromised by something out of our control and that set the tone for the rest of the weekend.

“Mat was taken out by Jordan in race 2 and again by Simpson in race 3 which completely derailed his weekend. Neither of the incidents were anywhere near in his control, he was totally blameless. There has been some questionable driving again this weekend and I think we need to see a lot more discipline being enforced in regards to how these incidents are dealt with.

“I appreciate that the officials have a difficult job to do, and in these weather conditions things happen, but there is a problem that needs sorting because the damage is everywhere. Mat’s car is extensively damaged and Martin was also hit very hard in the last race and has significant damage, which means a lot of extra work for the boys back at the workshop.

“Luke had a good weekend in a roundabout way. He made a mistake in race 1 with the yellow flag and was penalised for that but I think race 2 showed what is to come from him in the future. But as a team, it was a very trying weekend, especially off the back of Brands Hatch.
“We haven’t had a difficult start to the season for quite a while and this weekend in particular has been very frustrating. We win and lose as a team though and we’ll dust ourselves down and go to Thruxton in three weeks’ time looking to put it right.”

Mat Jackson #3:
“Unfortunately at the moment we’re unable to get the run on other cars because of something that’s out of our control. As a result of that, every lap that we race is completely on the edge and there’s no room for error.

“This weekend hasn’t gone well through no fault of our own. We’ve been caught up in other people’s stupid manoeuvres and it’s cost us highly.”

Martin Depper #30:
“Another disappointing weekend unfortunately. I think that the new tyre played a bit part in the incidents we saw today and I think that the whole grid is still learning about the tyre’s characteristics and the weather in race 3 highlighted that.

“We have a lot of homework to do before Thruxton, but I’m ever the optimist and confident that we have the right team in place to turn our results and championship around.”

Luke Davenport #300:
“I thought we’d got our difficult weekend out of the way at Brands but it seems not. It was the first time that I’d driven the car in anger in the wet this weekend so that was a big learning curve for me. Annoying not to have had more consistent results from the three races and to have just missed out on the points in race 2 was a shame, but I’m pleased that I did get to show my true pace and race craft in that race. The plan is to take that forward to Thruxton now with the aim of a more consistent set of results closer to the sharp end.”

The Dunlop MSA British Touring Car Championship returns to the fastest circuit on the calendar, Thruxton in Hampshire in three weeks’ time for rounds 7, 8 and 9 on May 6-7.