Menu
Account
HomeAll postsPro-Tips‘Carbon Care – We Show You How To Take...

(Disclaimer – Jarkle wrote this whole piece, I just uploaded it, he deserves the credit!)

Few composite materials have made as much of an impact on the automotive industry as carbon fibre, the high end material that manages to be both incredibly strong and phenomenally lightweight. Carbon fibre’s remarkable properties have helped make it an industry staple, having first been used by those racing at the highest levels of motorsport, before gradually filtering down into more mainstream, mass market offerings. The last 20 years have seen carbon go from being the sole preserve of eye-wateringly expensive supercars like the McLaren F1 (we’ll be covering this car in detail later on), to a desirable optional extra offered by many manufacturers, and even a material readily available on the aftermarket. 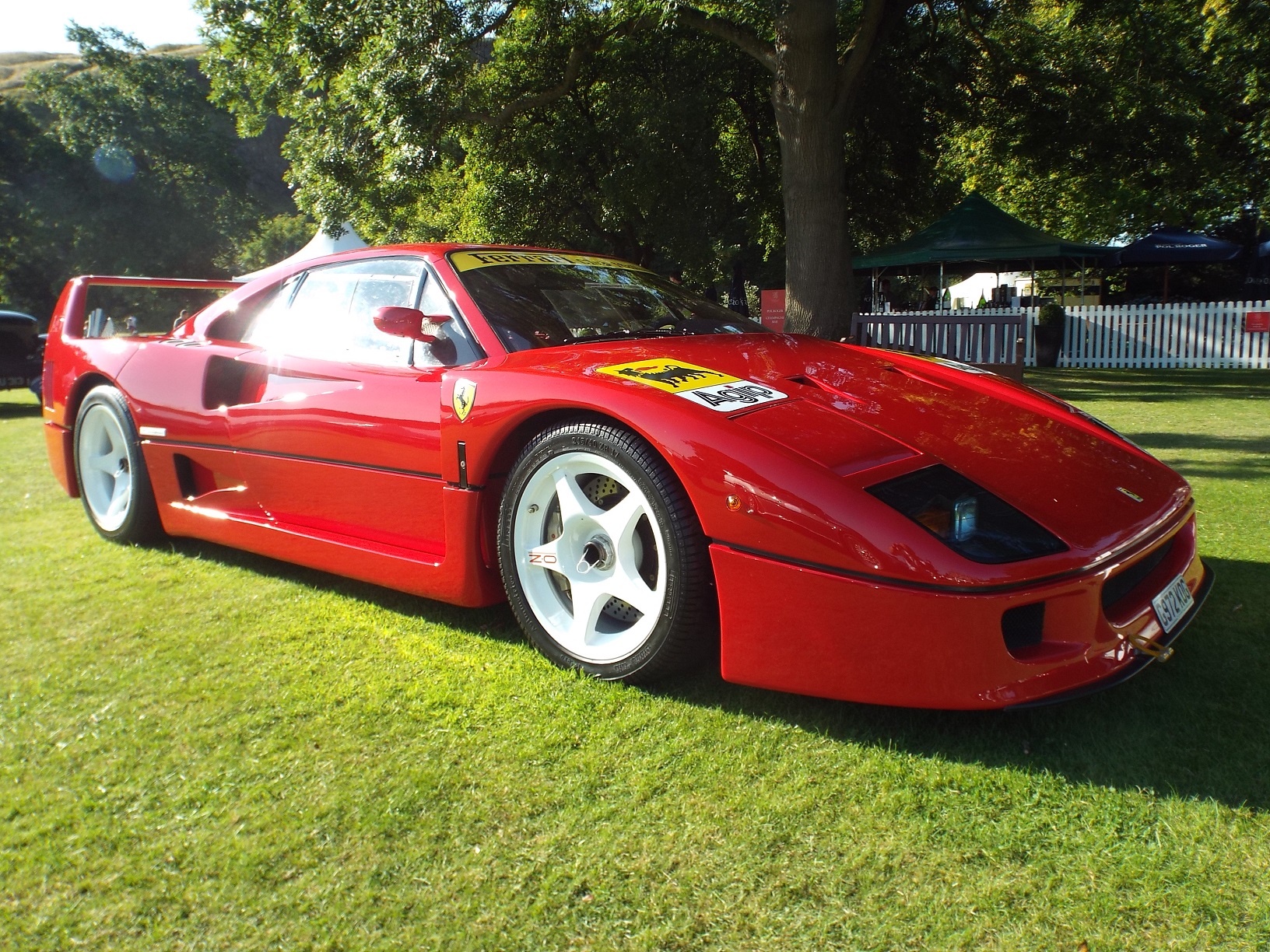 Despite carbon fibre’s slow trickle down into the mainstream car world, it’s still a high end, aerospace-derived material, and this has inspired much conjecture as to how best to go about keeping it looking its best. It’s a material which boasts all manner of unique properties, hence why Autoglym has been entrusted by so many firms to develop treatment plans for their carbon-clad cars. This then, is our guide to caring for your car’s carbon fibre.

Though there are many hundreds of different grades and weaves of carbon fibre out there, we’re going to discuss the two variants that you’re most likely to encounter, lacquered or bare carbon. The former is the kind that you’re most likely to find yourself dealing with nowadays, and, as you’ve no doubt guessed, it’s coated in a protective layer of lacquer just like regular painted bodywork. Un-lacquered, bare carbon fibre is a rare beast nowadays but does still crop up from time to time, often on more specialised applications like race and rally cars, or lightweight track day specials. 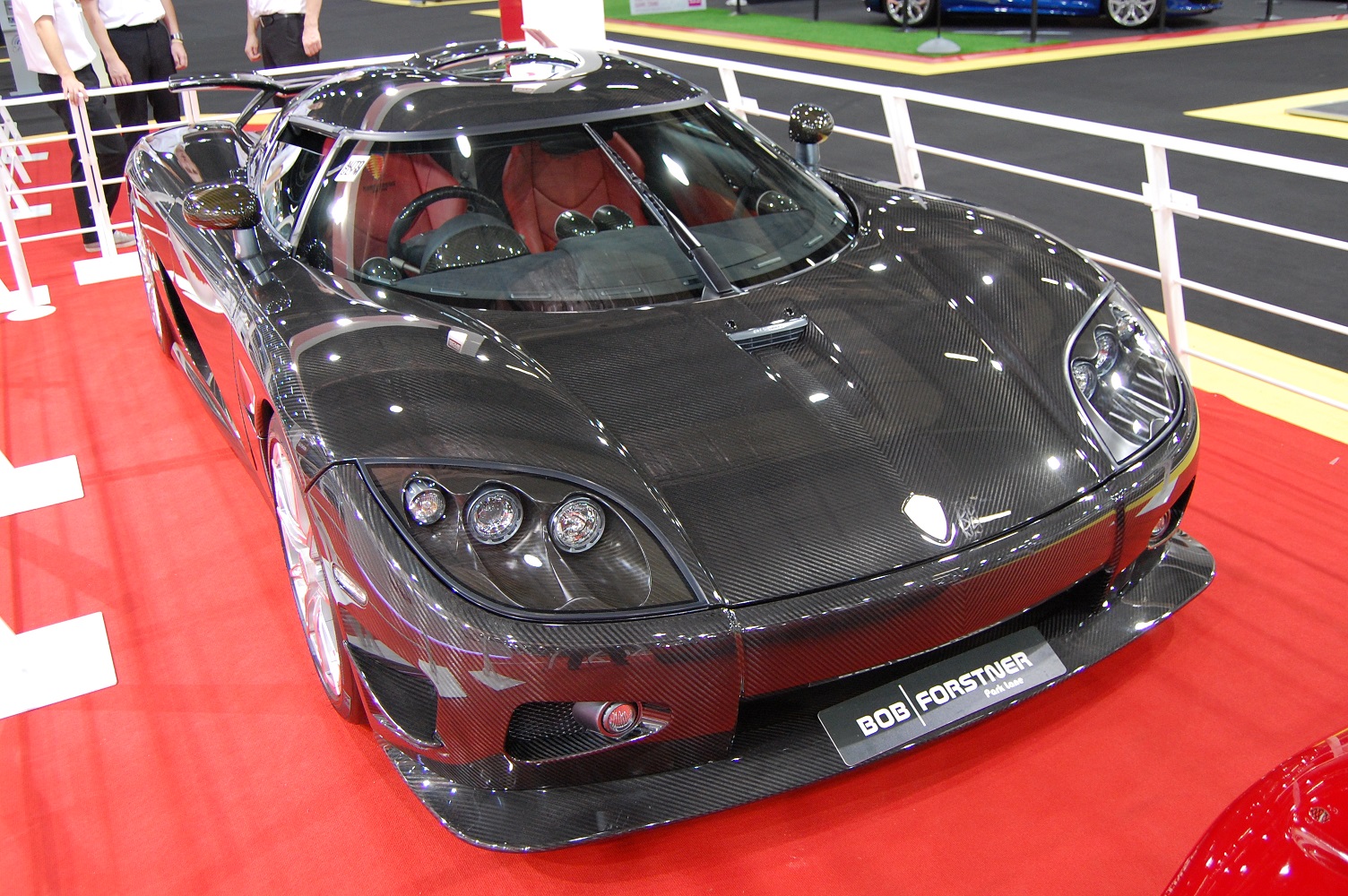 The Koenigsegg CCX/R decked out on carbon fibre. This is 1 of only 6 ever built in RHD. Hosted on the Autoglym stand at Top Gear Live 2011.

The layer of lacquer that coats most commercial carbon fibre applications serves the same purpose as the lacquer found on regular automotive paint, it’s a clear barrier that offers the material below protection from water ingress, contaminants, and all manner of other detritus. As such you can care for any lacquered carbon fibre in exactly the same way you would the panel of a ‘normal’ car.  You can wash it with your regular shampoo, use a clay bar, tar remover, polish and wax it. You are not actually working on the carbon fibre itself, but rather the clear coat of lacquer that sits over it.

This being said, the lacquer can’t offer complete protection from everything that the natural world throws at it, its biggest weak point being ultraviolet (UV) radiation. Continued, long term exposure to the sun’s UV radiation has been shown to turn the carbon fibre underneath an unpleasant ‘milky’ colour, and once it’s been discolored, it’s all but impossible to restore.

Autoglyms research led them to the reaslisation that the milkiness could be largely prevented by the semi-regular application of HD Wax, Super Resin Polish or Lifeshine, all products readily available in the Autoglym range. All three boast anti-UV formulations already, a trait that makes them all but invaluable to those intent on maintaining their car’s paintwork, yet has since proved every bit as effective when it comes to protecting more exotic materials like carbon fibre. Products like HD Wax and Super Resin Polish are so effective as they provide another barrier, a transparent line of defence that sits just above the equally see-through lacquer and prevents the sun’s harmful rays from being able to react with the carbon below.

Bare, exposed, pure-weave carbon fibre is a rare thing to find nowadays, with the vast majority of commercially available and frequently employed carbon being either painted, lacquered or both. Having said that, bare carbon is still regularly employed by race teams and can still crop up from time to time when discussing older, high end supercars. Bare carbon with its weave exposed is even more susceptible to the elements than lacquered carbon, as well as a whole host of other factors like heat, rain, grease and contamination from petrochemicals.

Caring for exposed carbon takes a bit of thought and planning as it’s a highly specialised material with a rough weave, the latter being prone to damage and discolouration from more aggressive cleaning products. To this end, Autoglym recommends using only the mildest of car care products on it, a good example being its Bodywork Shampoo, Bodywork Shampoo Conditioner and Ultra High Definition Shampoo, both highly effective solutions that are pH neutral.

Autoglym’s experience within this highly specialised and potentially extremely costly area dates back well over twenty years, when the firm played a key role in developing a range of cleaning steps for the McLaren F1, the first road car to make full use of carbon fibre in its construction. The majority of the F1’s carbon could be found within its monocoque construction where it was protected from the elements, yet a smattering of the material did appear in more exposed places, and this is where the Woking concern sought out Autoglym’s expertise.

In 1981 McLaren revolutionised the construction of racing cars with the creation of Formula One’s first carbon fibre monocoque. Later in the decade McLaren picked up the pace of development, taking composite technology onto the road via the McLaren F1. – via mclaren.com

“We were already a well established and respected car care brand in the early ’90s,” explains Mark Docherty. “McLaren were at pains to develop a kit of car cleaning products that it could give to buyers of the F1, though of course all products contained within said kit had to be 100% safe to use on the car, particularly its carbon fibre.”

Ron Dennis, Gordon Murray and co weren’t merely concerned about the effect that sunlight and contaminants would have on their world-beating supercar, they also wanted to understand how the carbon fibre used on certain areas of its exterior would react to extremes of heat, the kind of heat generated by machine polishers and other mechanical cleaning equipment. 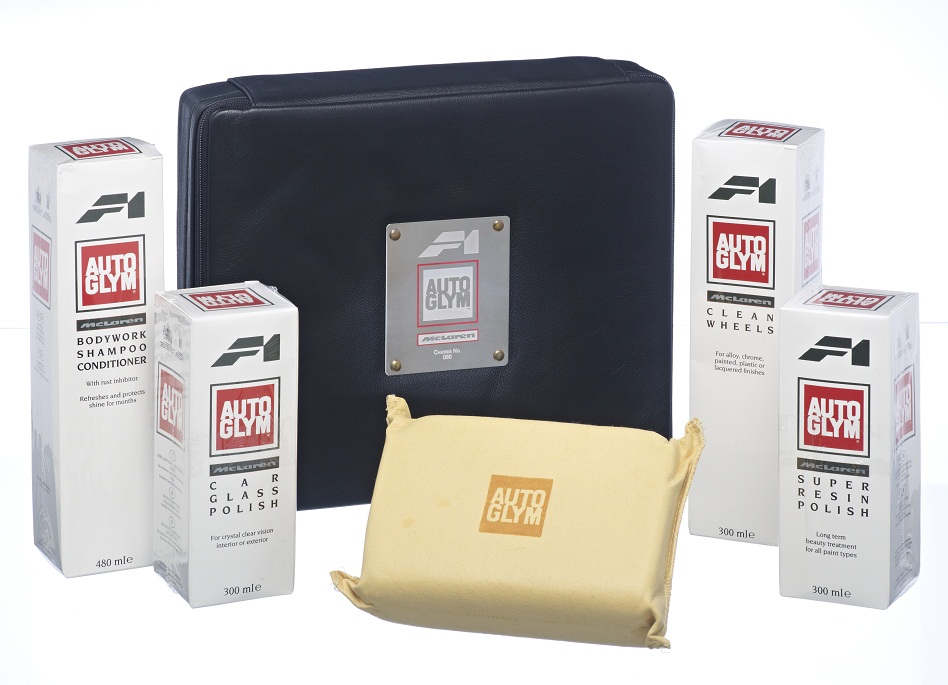 Every Autoglym McLaren was made to order. Each kit featured a numbered plaque matching the car number.

Cue an intense programme of research and development, and the creation of a specialised laboratory specifically for testing and formulating car care products, something that Autoglym still makes huge use of today. The end result was a neat little bag of Autoglym-approved and branded car care products, one given away with each and every McLaren F1 sold, and one of the greatest product development tales within Autoglym’s long and storied history.

Autoglym continues to be at the sharp-end of product development, especially if said products will ultimately be used on high end or specialised materials. The firm continues to develop advanced car care solutions, while also working with some of the globe’s foremost car manufacturers in an attempt to devise solutions to some of the most common dilemmas faced by car cleaning fans. 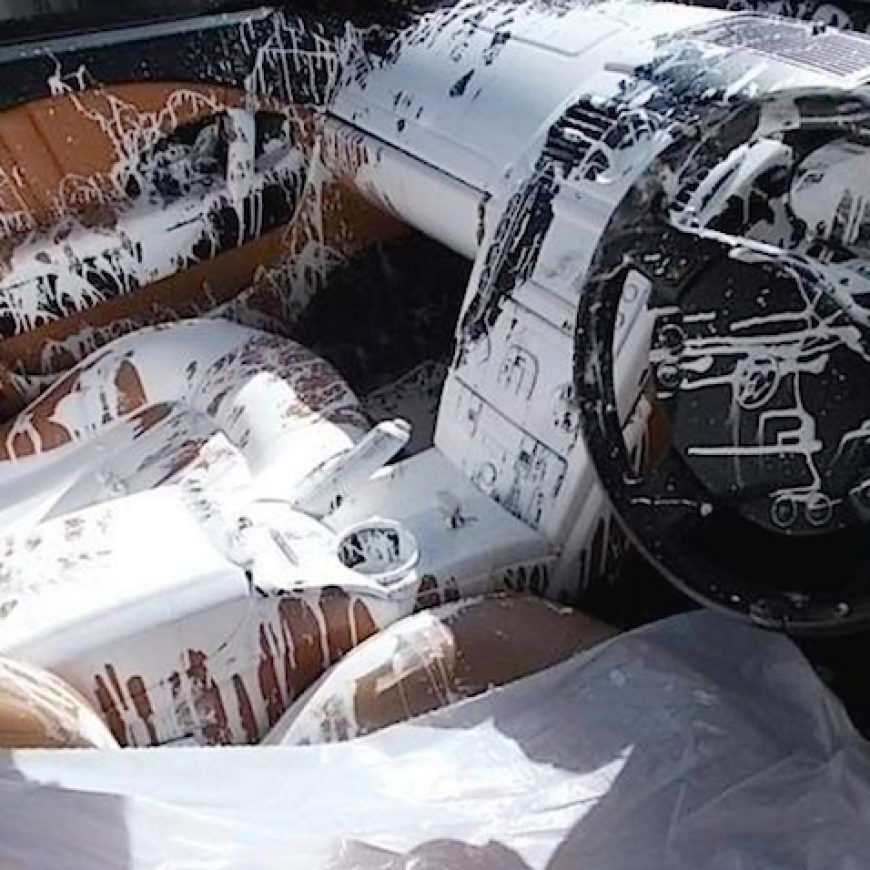 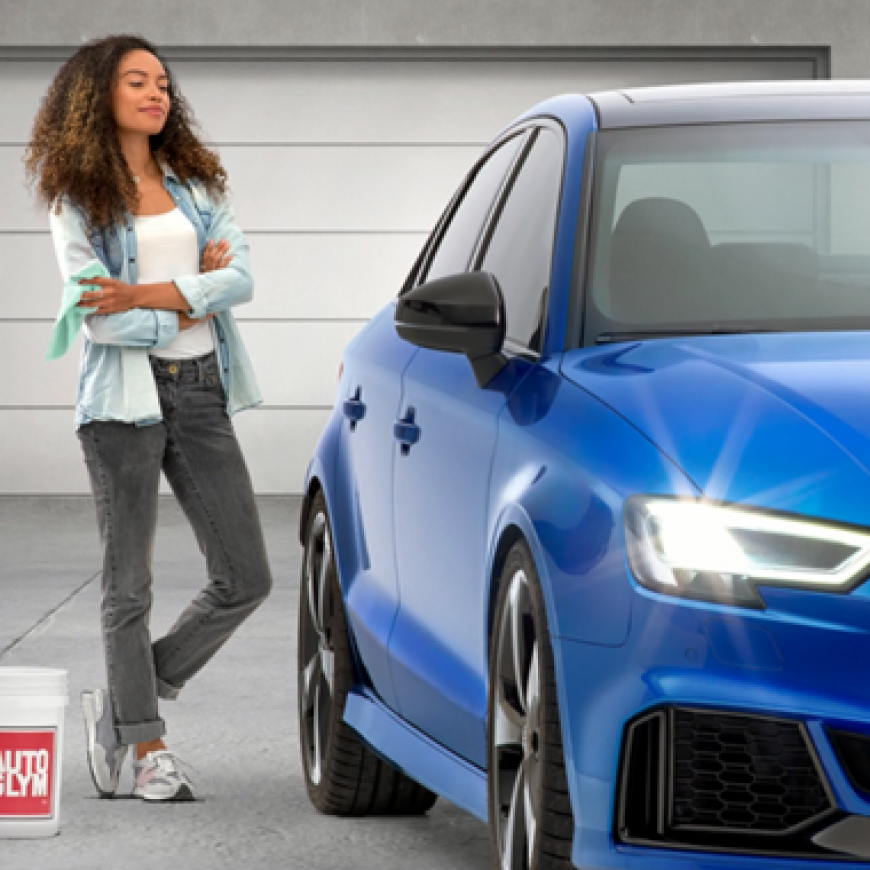 The ultimate cleaning guide for the #FeelCarProud driver