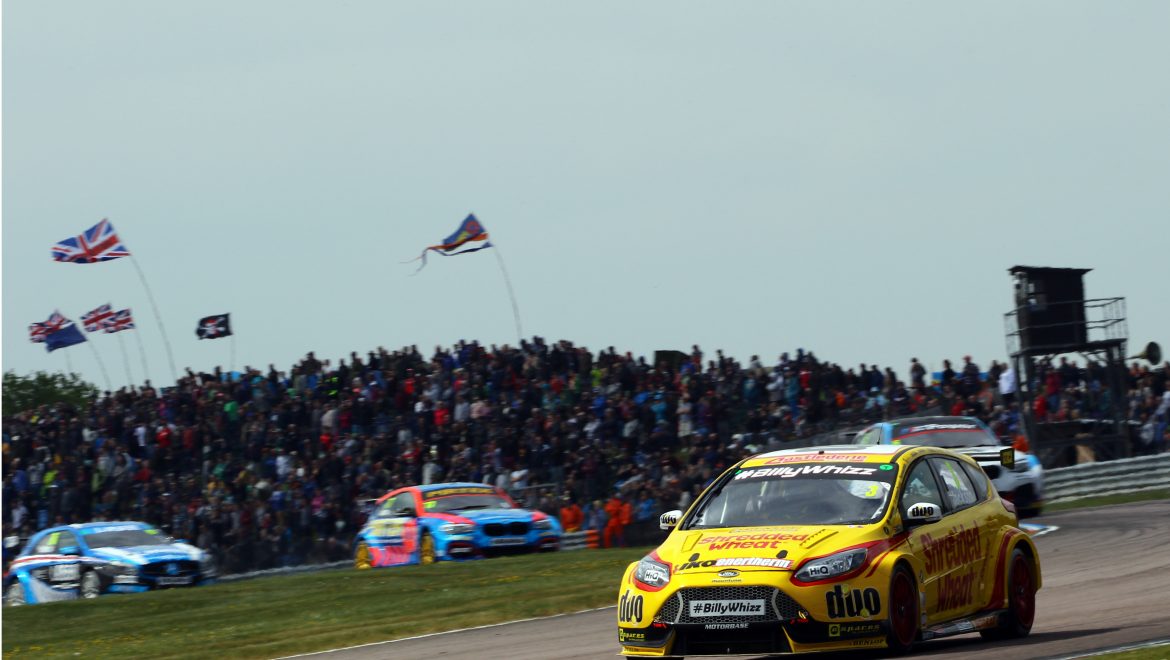 Team Shredded Wheat Racing with DUO secured two points finishes during rounds 7, 8 and 9 of the Dunlop MSA British Touring Car Championship at Thruxton this weekend (May 6/7).

A strong qualifying performance from Mat Jackson saw the Motorbase-run Focus ST break into the top ten during Saturday’s afternoon session with an equally impressive lap from rookie Luke Davenport securing P15 for the #300 car. Set-up issues for Depper unfortunately resulted in a disappointing P31.

Sunday’s opening race delivered the first set of points for Team Shredded Wheat Racing with DUO with Jackson piloting the #3 Focus through to take P8 at the final flag – his best result of the weekend. Davenport’s BTCC learning curve continued, and the DUO-backed driver battled hard in the mid-pack, eventually crossing the line in P17. Depper also found his missing pace to bring the #300 Focus home in P24.

Regrettably Jackson’s progress in race two was halted abruptly after contact from another driver on the opening lap pushed the #3 Focus off the track. Forced to pit to clear grass from the radiator, Jackson re-joined at the back of the grid just as the race was red-flagged. After an hour-long delay, the race restarted but regrettably Depper’s weekend came to an end on lap 6 after the Midlands driver was involved in a race-ending accident, resulting in the race positions being declared.

Davenport’s building confidence was rewarded with a P17 finish and his first Jack Sears Trophy win of the season as the highest placed rookie in the race. However after a lengthy delay, two red flags, and just three laps to recover the lost places, Jackson had to settle with a P20 finish.

A superb charge off the line from Jackson in race 3 saw the #3 Focus move up into 14th by the second tour of the circuit and the Warwickshire driver claimed his second points finish of the weekend. Sadly Davenport’s weekend ended on a low note with the #300 Focus ST unable to complete race 3 after sustaining heavy damage on lap 10.

The weekend’s results see Team Shredded Wheat Racing with DUO in 4th place in the Independent Teams’ Standings, with Jackson currently in 7th. The Dunlop MSA British Touring Car Championship heads to Cheshire next, for rounds 10, 11 and 12 at Oulton Park on May 20/21. 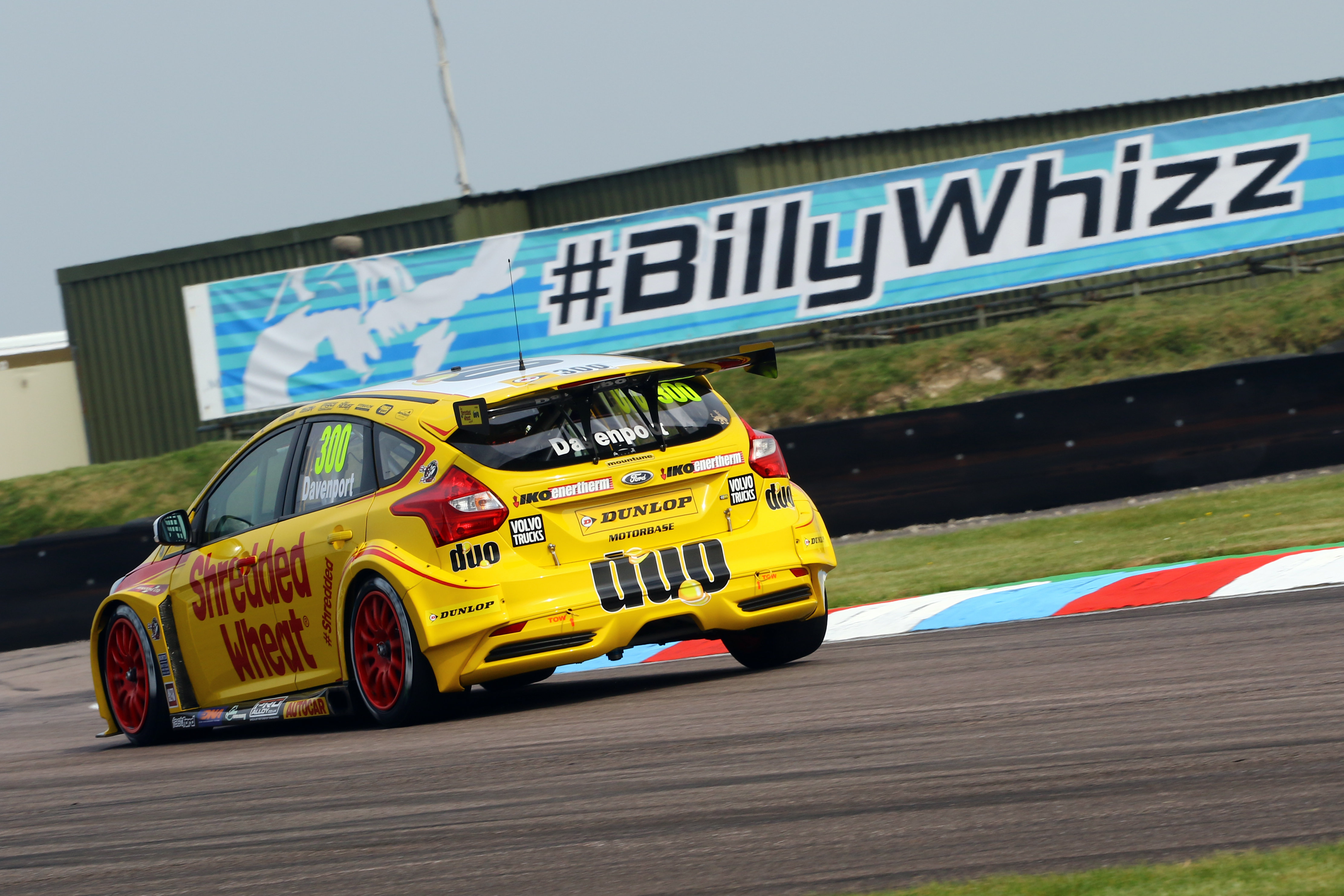 David Bartrum Team Principal:
“We started the weekend in a positive mood. Luke did a super job in free practice 2, getting up to 6th.Qualifying also went well with Mat getting into the top ten and Luke in 15th – which is a big ask this year up against such a competitive grid. Unfortunately Martin had a tough weekend. He didn’t quite dial into the car as he would have liked and then the accident in race two ended his weekend early.

“We’ve had a few incidents in the middle of the races at each event so far this season and it’s difficult to really push forward when the racing is stop and start like that, however, we just have to take the positives and keep pushing on. Lady luck was on her tea break again for us this weekend but we’ll turn it around and roll back out ready to fight back again at Oulton Park for the next round.”

Mat Jackson #3:
“The weekend started off well. Qualifying was good, to come out in the top ten was a great result and it put us on the front foot for race 1. We had a decent result with P8 and looked strong to carry that momentum into the next race until I was fired off, which pretty much killed our weekend.

“I think that the pace is there, P10 in qualifying and P8 in race 1 shows that the car’s in the mix, but yet again we’ve not had the chance to show this as we’ve been put to the back of the grid by other drivers.”

Luke Davenport #300:
“I’m very pleased with how things went on Saturday, that was our plan coming into the weekend, to improve our qualifying results and we made massive gains. Sadly, we weren’t able to quite take that confidence into the races and we had a difficult day after having our race 3 ended by someone else. It’s a bitter pill to swallow but we just need to put it behind us, move onto the next round and aim put it right there.”

Martin Depper #30:
“It’s been a difficult weekend for me. We didn’t start off where we wanted to be with the set-up on Saturday and that put us on the back foot really. We made some improvements and had a good first race. I managed to make up some places but we got blocked mid-race which hampered a couple of positions that I’m confident we could have got.

“I started to suffer with a little bit of oversteer in race 2 and as we got into Goodwood I pushed a little too much to try and make up places but ended up putting a wheel on the grass which sent me into a slide, then into the barriers quite heavily. Disappointing weekend for me I do like Thruxton, it’s a fantastic track but this weekend just wasn’t meant to be.”