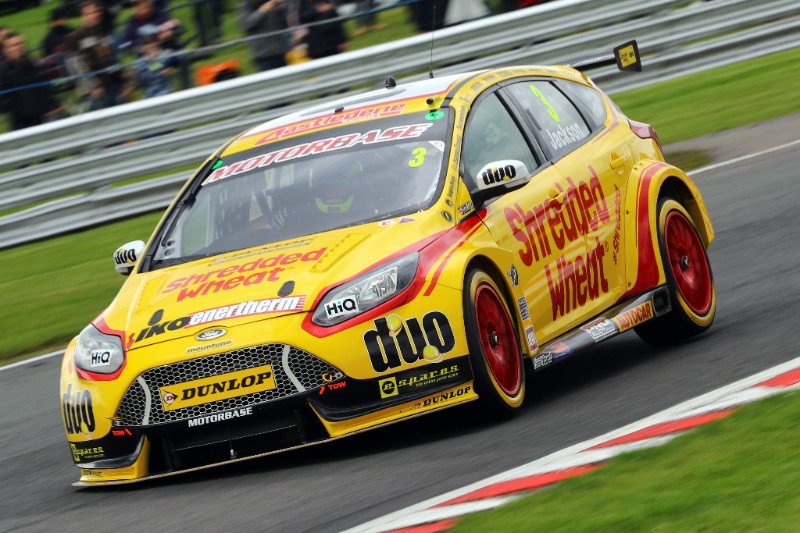 Mat Jackson was the lead scorer for the Motorbase-run squad from the weekend, with the Warwickshire-based driver taking a season best 6th place finish in Sunday’s opening race, followed by a 7th in race two. Having just missed out on pole from the reverse grid draw for the race 3 grid, Jackson’s fortunes unfortunately gave out, with an engine issue forcing the #3 Focus into early retirement on the opening lap of the final race.

The weekend ended on an excellent high note for BTCC rookie Luke Davenport after a stalled start during Saturday’s afternoon qualifying session. Having made progress during Sunday’s opening two races; a spirited drive from 17th on the grid was rewarded with top ten finish – marking a career-best BTCC result for the Cambridgeshire man and his first visit to the podium as the top scorer of the weekend in the Jack Sears Trophy championship.

Regrettably it was another difficult outing for team-mate Martin Depper. A heavy crash during the closing minutes of qualifying saw the #30 Focus relegated to the back of the grid for race 1 leaving him with a tough battle through the pack during all three of Sunday’s races – with his best-placed P20 finish coming in race 2.

Oly Collins – Team Manager:
“We had a few improvements on the car starting the weekend and that showed qualifying in the top 6 and getting some good points finishes on Sunday.

“A great result for Luke in securing our first Jack Sears Trophy and his first points finish with a top 10 result. He’s been showing this kind of promise all season but just hadn’t quite realised it until today. A real shame for Mat in race 3 with the engine issue, especially just as we were looking good for another decent points finish. It’s very rare for us to suffer this kind of issue.

“In a way it’s nice to come away from a weekend disappointed with top 6/7 qualifying and race pace. That’s because we know there’s so much more to come from us!”

Mat Jackson #3:
“The weekend was an improved performance all round, although we’ve still come away disappointed with the results. We started the weekend well, qualifying in P7 which was a good start, but we could have been even higher had we not have been caught short with the red flag at the end –  a top 4 was definitely on the cards, which was frustrating.

“It was great to be back up challenging at the sharp end for 4th in race 1 and the car was on the pace.  We struggled with the consistency of the brakes in race 2 which really held us back in P7 but it was another solid result, so to not get the chance to build on that in race 3 was a massive disappointment.

“Unfortunately these things happen in racing; it was something that was out of our control and just one of those blows that we couldn’t have done anything about. But we dust ourselves off again and we’ll come back stronger at Croft.”

Luke Davenport #300:
“We’re very happy with the progression in the car as a team this weekend. Mat’s qualifying showed that and I was a little bit gutted not to be right up there challenging alongside him. We were looking good in sectors one and two during the session but then sadly lost out with the red flag in the final sector which set us back.

“Sunday was great; we had two solid, progressive races without any major incidents and worked our way up the grid to 17th for race 3. I got a good start and felt I had a decent bit of momentum and we managed to make up some places early on. It was a nice personal achievement for me to get past some of the established drivers on the grid like Plato and Goff to get my first top ten and first Jack Sears Trophy. I’m a happy boy!”

Martin Depper #30:
“The weekend started well on Saturday and I was enjoying being back in the top 10 pace in FP2, but qualifying pace was lacking. I struggled with the brakes all weekend which cost us in qualifying and with a grid as competitive as this year, when you qualify out of position it’s so hard to get your weekend back on track. The car felt much better in the races but I just couldn’t get the best out of it. I’m looking forward to Croft now though as it feels like we’ve turned a corner with the car.”