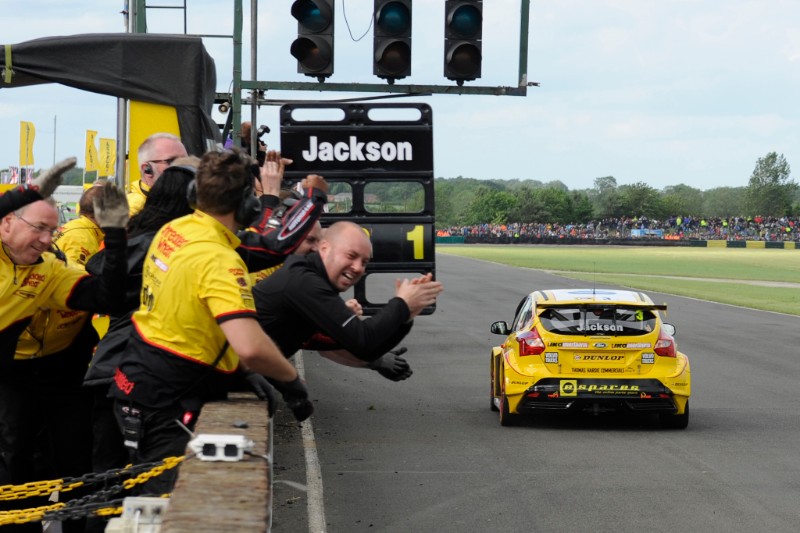 Team Shredded Wheat Racing with DUO ended a difficult and emotional weekend on a high, securing its maiden win of the season during rounds 13, 14 and 15 of the Dunlop MSA British Touring Car Championship at Croft circuit (June 10/11).

Despite a challenging time for the team, the cars of Mat Jackson and Martin Depper were prepared and readied for Sunday’s race day. Having qualified in 3rd place during the shortened session, Jackson went on to take three Independent race wins, an overall 3rd place podium and outright race win for the Motorbase-run squad – all of which were dedicated to his team-mate Luke Davenport.

Jackson opened his podium tally in race 1 with a faultless drive, holding position against the faster rear wheel drive BMW’s to claim his first rostrum of the season and Independent race win in the #3 Focus ST. Depper carved his own path in the #30 Focus, making his way up from P25 to cross the line in P18.

Depper’s progress continued in race 2 with an impressive start that saw the Midlands-based driver break into the points-scoring zone on the opening lap before making his way up to take P10 at the flag – his highest placed finish of the season so far. Running on the harder compound option tyre and with 57kg on-board, Jackson’s pace was slightly dampened; however a sterling drive from the Warwickshire driver saw the #3 Focus claim its 2nd Independent win of the day with a P7 finish.

With the reversed grid draw slotting the #3 Focus into P3 for the final race of the day; Jackson made a trademark fast-start off the line and stole past Turkington’s BMW to take P2 by the first corner. After chasing down race-leader Ollie Jackson as the pair raced through Tower bend on lap 3, the Team Shredded Wheat Racing with DUO driver stormed into the lead. After building up a comfortable gap on the pack as the race unfolded, Jackson came under increasing pressure from Sutton’s fast-charging Subaru in the final laps. The pair raced side by side as they came through the hairpin on the last lap with Jackson taking the chequered flag by just 0.877 of a second.

The weekend’s results sees Team Shredded Wheat Racing with DUO leap to the top of the Independent Teams’ Championship standings, with Mat Jackson now sitting in 4th in the Independent Drivers’ and 9thoverall. The Dunlop MSA British Touring Car Championship now enters its mid-season summer break before heading to Norfolk’s Snetterton circuit for rounds 16, 17 and 18 on July 29/30.

David Bartrum Team Principal:
“Obviously our thoughts from this weekend are with Luke and his family. What happened to him, Jeff and Aron is an unfortunate part of motorsport. It’s been difficult for everyone involved but they were looked after very well and they’re in the best capable hands.

“Luke has quite a journey ahead of him to get back where he needs to be, but the show must go on and he would want that and when he’s fit and well we’ll be playing him all the videos and he’ll be more determined to get back out there.

“Today’s results were the tonic that everyone needed. It’s been a difficult day for the team dealing with the emotions of podiums and race wins which is what we all come racing for but that’s balanced with the guilt of feeling that Luke should have been celebrating with us.

“Martin did a super job today. He’s driven up all the way through the pack and into the top ten and he’s made a big step forward this weekend. Mat’s delivered everything we asked of him, he’s been on the podium in every race and we leave here happy with 5 trophies and heading into the summer break on a high note.”

Mat Jackson #3:
“The car has moved on massively from Oulton Park. The boys have worked really hard and the results this weekend have shown that. It’s great to be back up there and challenging for wins. From the word go the car was quick, free practice and qualifying showed great pace and P3 put us in the right place for the first race. To perform so strongly here against the rear wheel drive cars is fantastic. We can go away from here happy with our performance and hopefully build on this for the second half of the season.

“Obviously out attention is focussed on Luke and his family. It’s never nice to see any driver involved in that kind of incident but when it’s your teammate it brings it even closer to home. We just hope that he comes out of it ok and is back with us and in a race car soon.”

Martin Depper #30:
“Yesterday was obviously a difficult start to the weekend after Luke’s accident but it’s been a great race day for everyone involved with the team – and what we all needed.

“We learnt a lot about the car in FP2 and managed to take those learnings into the races and make the results stick in races 2 and 3. I’m very pleased with the way the guys have worked with the car, particularly with the hard tyre in race 3, where we managed to hold the pack off. Race 2 and 3 have hopefully demonstrated that we’ve turned a corner with the car, and our confidence is going to be high now going into the second half of the season.

“Our thoughts are obviously with Luke and his family, it’s especially difficult when a team-mate is involved in such big accident but we’ll all be by his side and helping him in whatever way we can.”