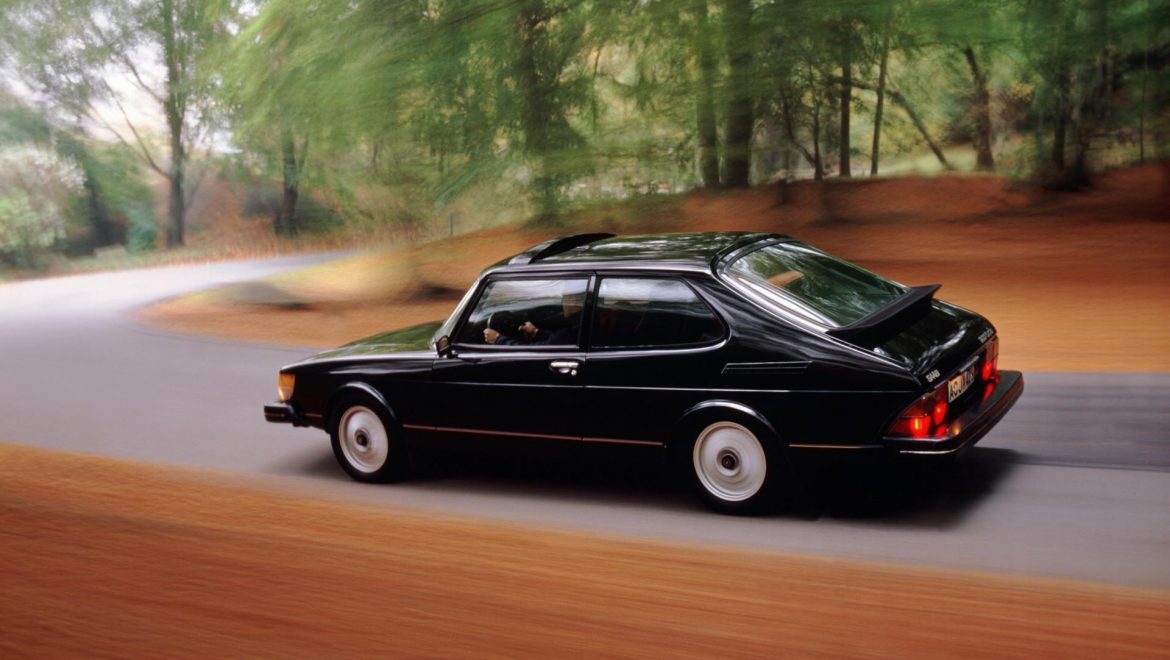 Summer is here and the weather is hot, all of which has got us thinking about classic cars, specifically the kind of ‘real world’ classic cars you can go out right now and buy for a real world sum, five thousand pounds for example. Now don’t get us wrong, you aren’t going to be tripping over Ferrari GTOs and Porsche Speedsters for 5k (unless you also have access to a time machine or wormhole) but you might well be surprised by just how much classic bang you can get for your buck these days.

With this in mind, here are Autoglym’s favourite real world classic cars, all available (with a bit of sleuthing) for five thousand pounds or less. 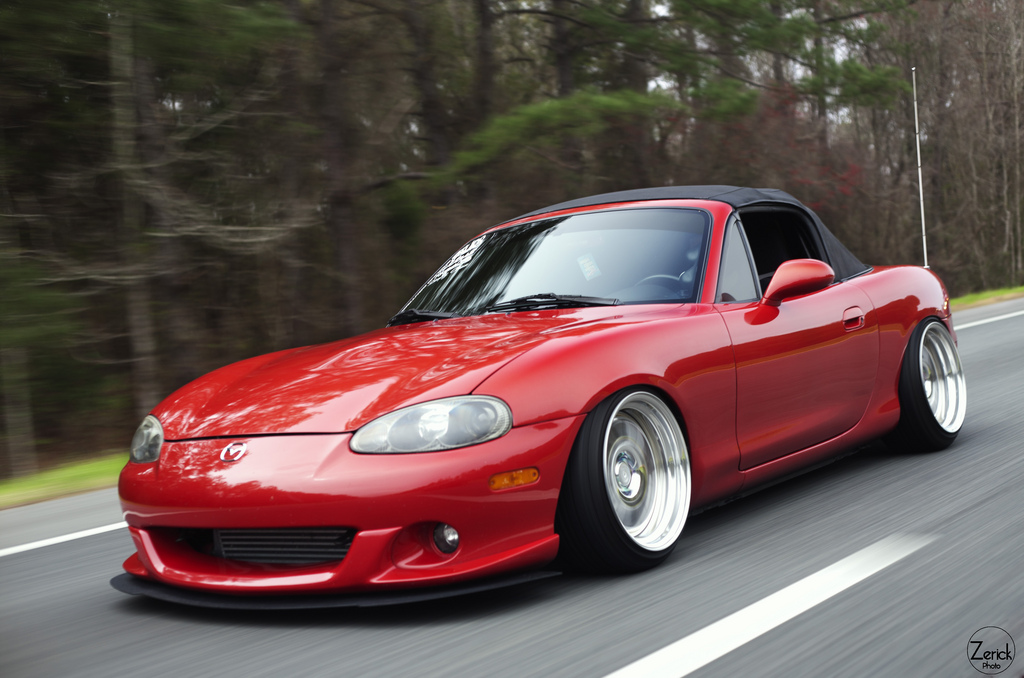 It’s hard to overstate the impact the Mazda MX-5 had when it was launched back in 1989, but it’s fair to say that this pretty little roadster single headedly reinvented the small British sports car market. That it took a Japanese firm to do this says a lot about both Mazda and the state of the British motor industry at the time, but the result was the same; a simple, lightweight sports car that was fun to drive on the limit yet, thanks to its relatively low power output wouldn’t punt the unwary into the nearest hedgerow at the merest sight of wet weather. The fact that Mazda is now on its fourth generation of MX-5 rather proves how good the basic recipe was. 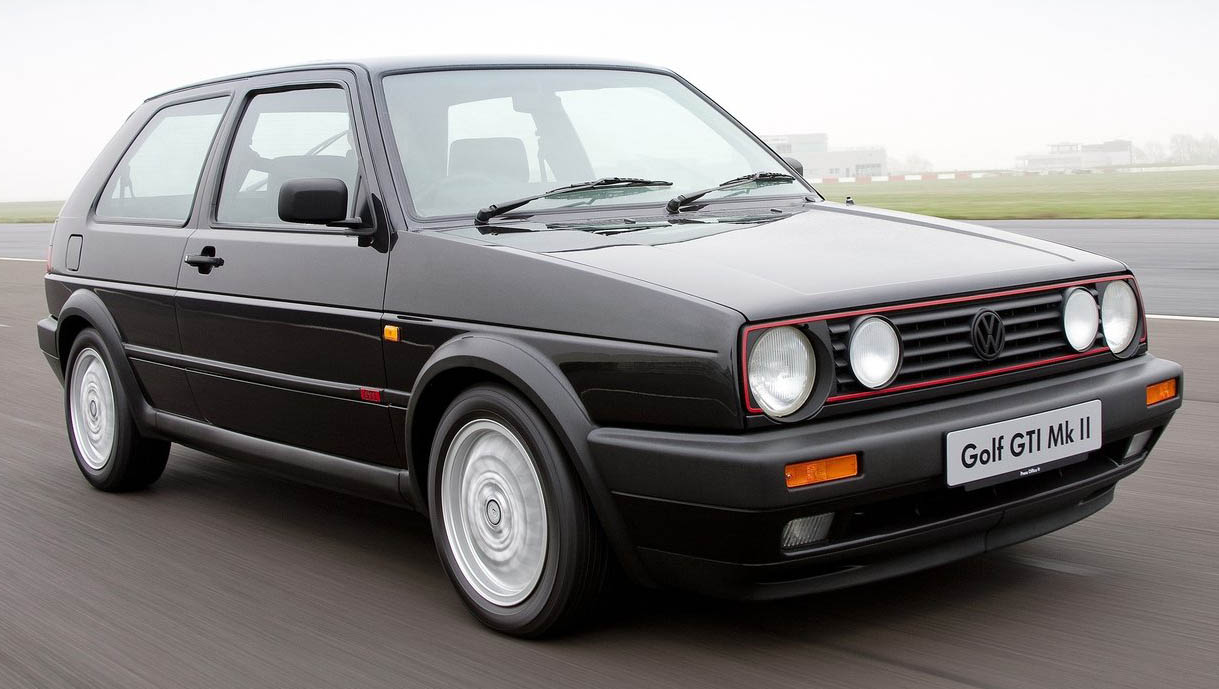 You’ll need to strike while the iron is hot if you want to scratch your Mk2 Golf GTI itch, they won’t stay affordable for much longer

The days of picking up immaculate Oak Green Golf GTI 16vs for five thousand big ones are a long, long way behind us now, but that doesn’t mean there aren’t still bargains to be had. You’ll need to search long and hard, true, but you can still pick up early 8v Golf GTIs for less than our self-imposed limit, even if they may well require a little TLC. It’s one of the more hardcore options on this list then but well worth the graft in our opinion; you’ll be getting one of the all-time greats of the hot hatch genre, and one who’s value can only go up. 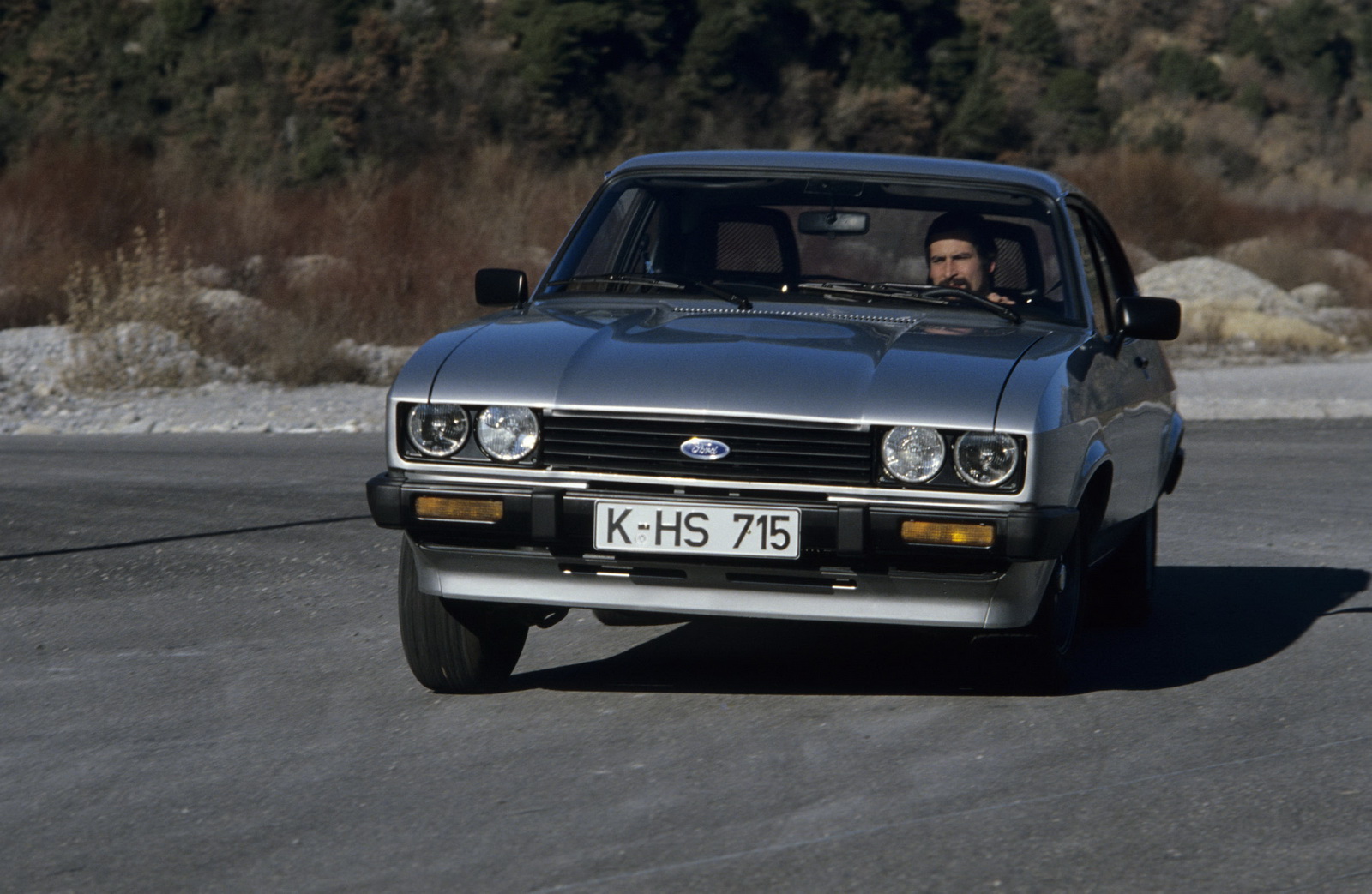 The Mk3 Capri is a rear-wheel drive blue oval icon, and one which can still be had for a reasonable sum

You’ll doubtless be well aware that the price of old school, rear-wheel drive Fords has gone through the roof in the last 15 or so years, and this means that Escorts and the vast majority of Cortinas are well beyond our budget. The good news is that ‘the car you always promised yourself,’ the Capri, is still within range, though you’ll probably have to settle for a Mk3 powered by either a 1.6 or a 2.0 Pinto. What these cars lack in grunt and handling finesse they more than make up for in presence and character. Take it from someone who’s owned one, you’ll never tire of jumping in a Capri and looking out over that ridiculously long bonnet – even if it’s only home to a four-pot! 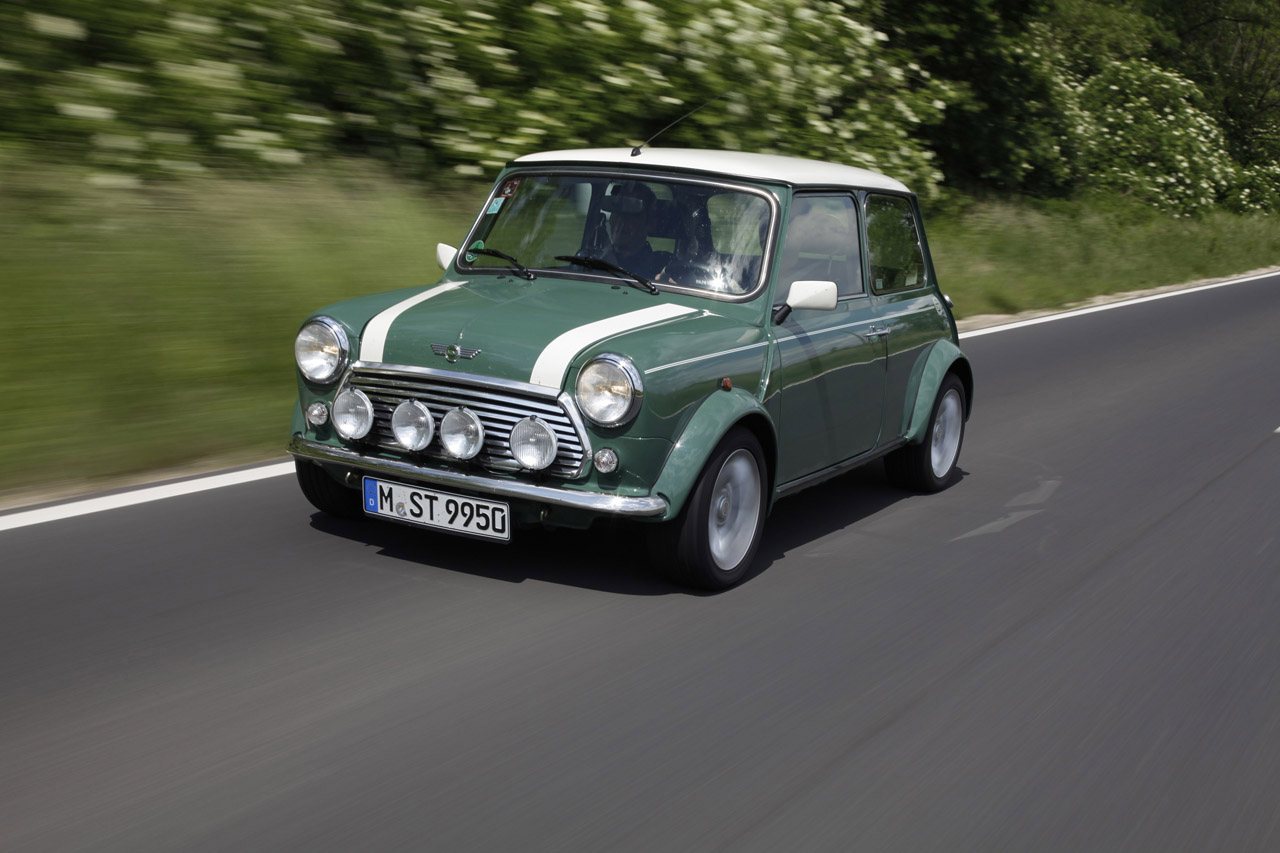 It’s still just about possible to nab a classic Mini within our budget. Just.

Much like the Fords mentioned above, the price of classic Minis has well and truly exploded in recent years so you can kiss any dreams of late ‘60s Cooper S ownership goodbye. Still, five large can still net you a half decent Mini with all the essential elements; a wheel on each corner, cheeky looks and a baby A-series thrumming away under the bonnet. Of course the real beauty of the Mini is that it’s never been about badges, status or power, and you really can have just as much fun in a Mayfair as you can a Cooper S. And in any case, if power is your thing then you can always tune it… 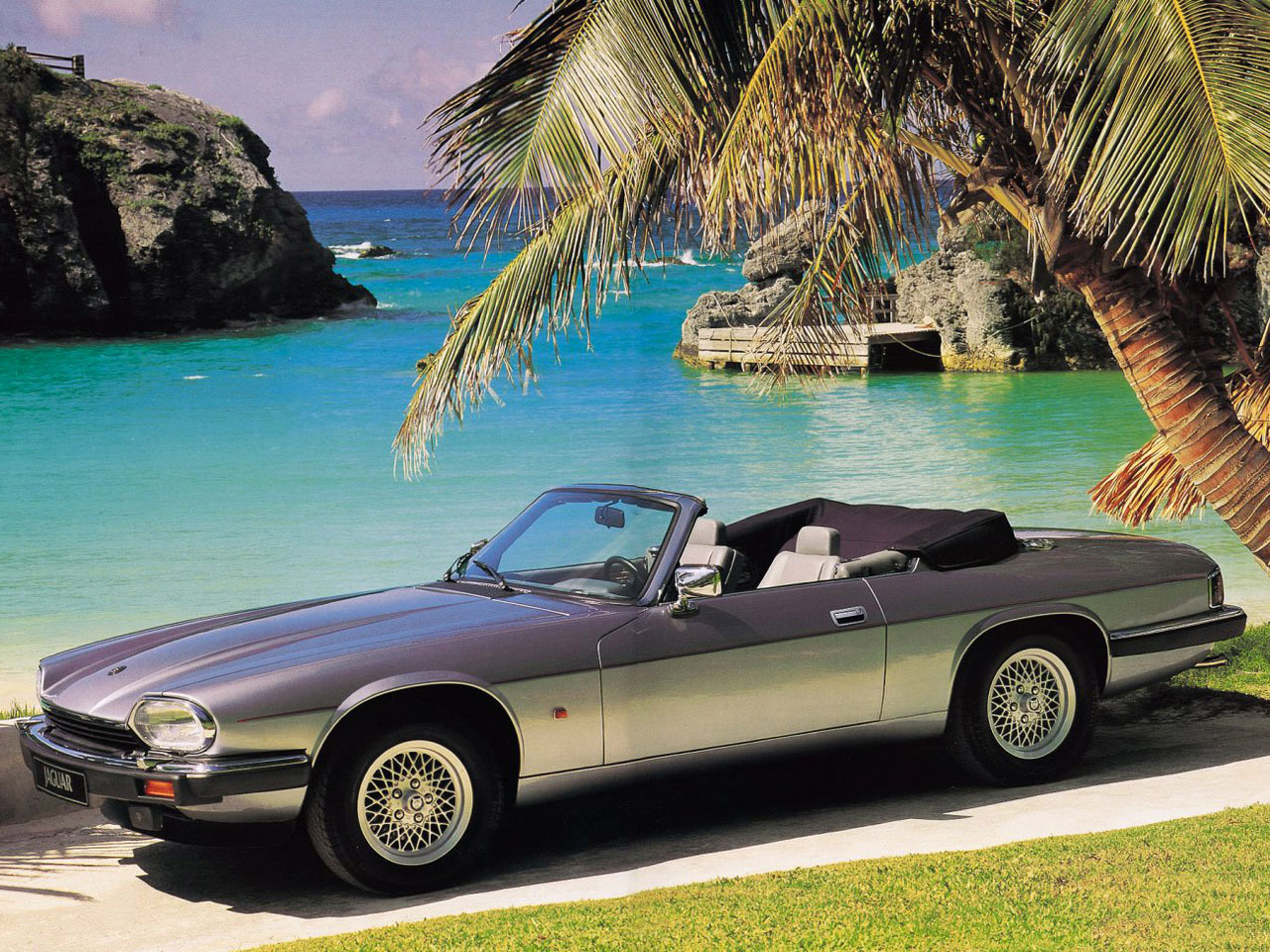 Buying a Jaguar XJS for £5000 is either a stroke of genius or insanity. We’ll leave it to you to decide which it is!

Feeling brave? Step right this way, Sir. There’s no getting away from the fact that buying a Jaguar at this price point is not without risk – lots of risk! British Leyland build quality has a well warranted reputation for being patchy at best, and that’s before we get to the four decades of potential abuse and bodging. Still with us? Good, because if you are brave, are willing to get your hands dirty and don’t mind hunting hard, there’s a lot to love about the XJS, not least its achingly pretty looks, charismatic (if thirsty) range of engines, and the fact that their values continue to rise. 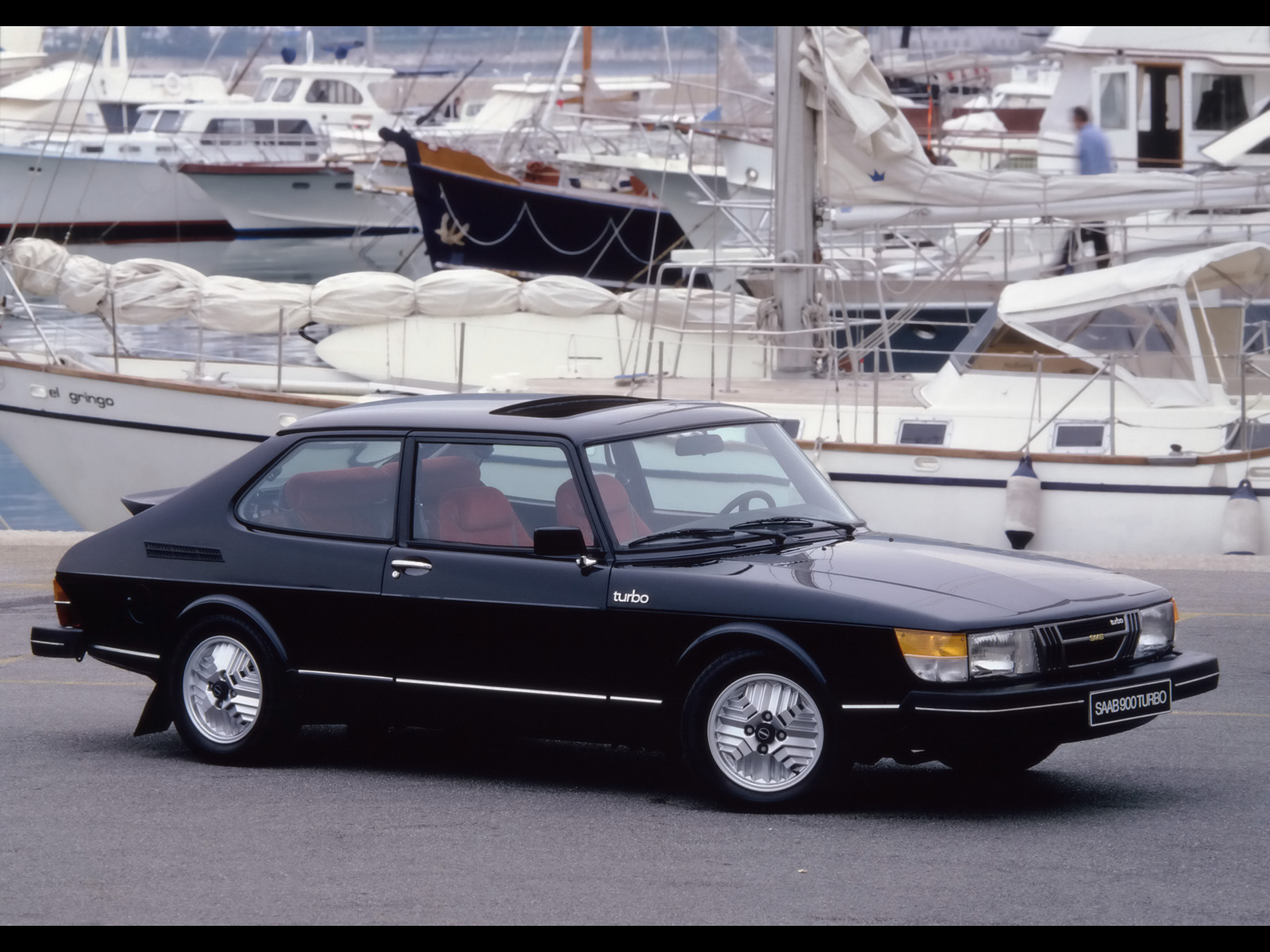 Finding a good example for £5000 won’t be easy, but it is still possible to bag yourself a boosted Swede under budget

The sad demise of Saab as a mass market car maker leaves the automotive world a poorer place, but for £5000 you can still grab yourself an example of one of its finest (not to mention quirkiest) creations, the 900 Turbo. Prices of good examples continue to rise at an alarming rate so if you’re planning on taking the plunge then now really is the time to do it, though there are currently a number of perfectly serviceable (albeit far from immaculate) Turbos well within our budget, even more if you’re willing to forgo a roof and plump for a later convertible. 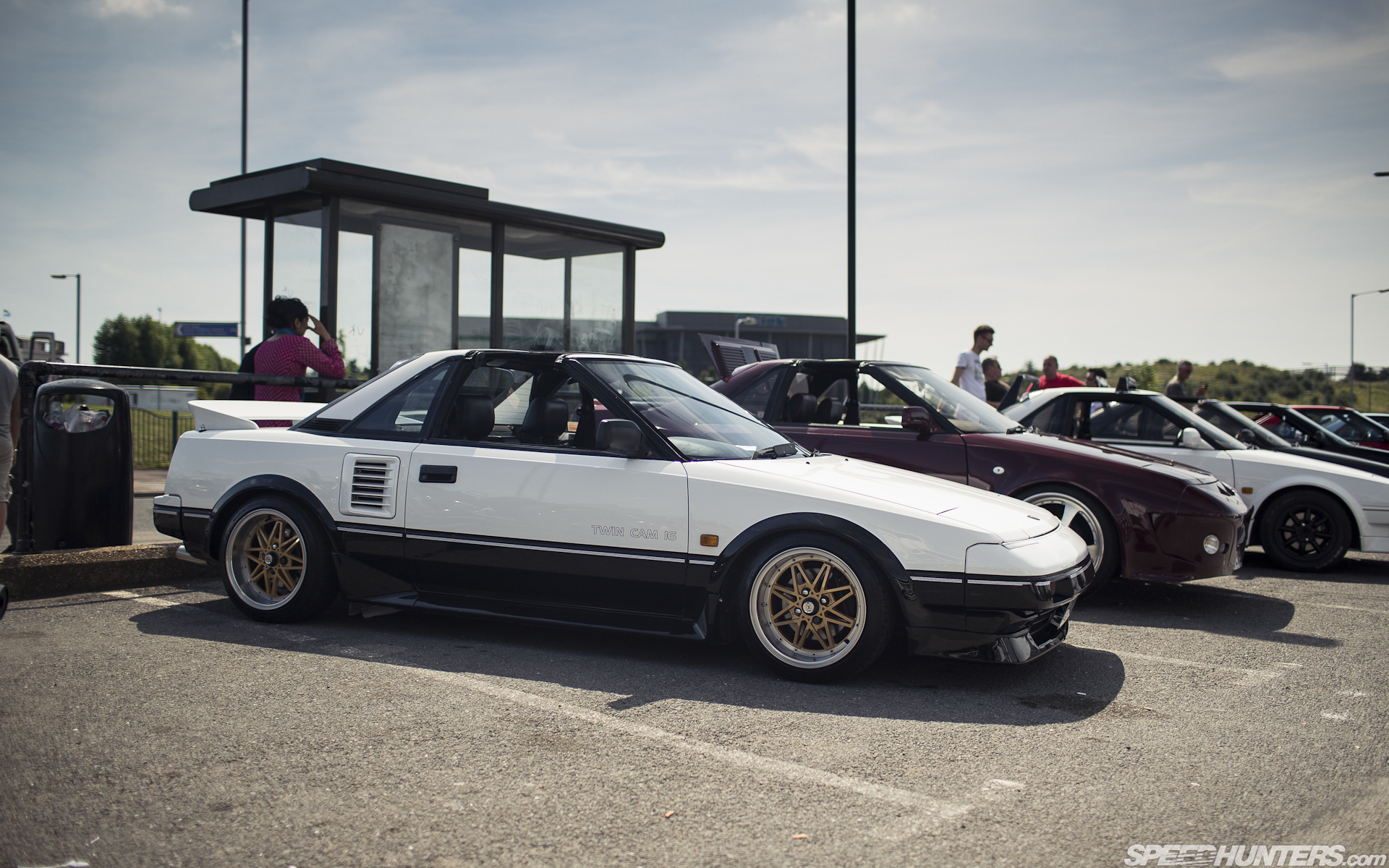 Our budget actually gets us any number of Mk2 MR2s, including a handful of deeply suspect, hard-living Turbos, but we’ve opted to include the car which started it all, the Mk1. Japanese cars of this era need very little incentive to rot and rot with gusto so terminal corrosion should be your number one area of concern, along with missing trims and other unique components, all of which are now becoming hard to track down. Take your time and buy well though and you’ll be treated to one of the greatest Japanese sports cars of all time, one with great looks, sparkling if not exactly rip-snorting performance, and a mid-mounted engine powering the rear wheels. 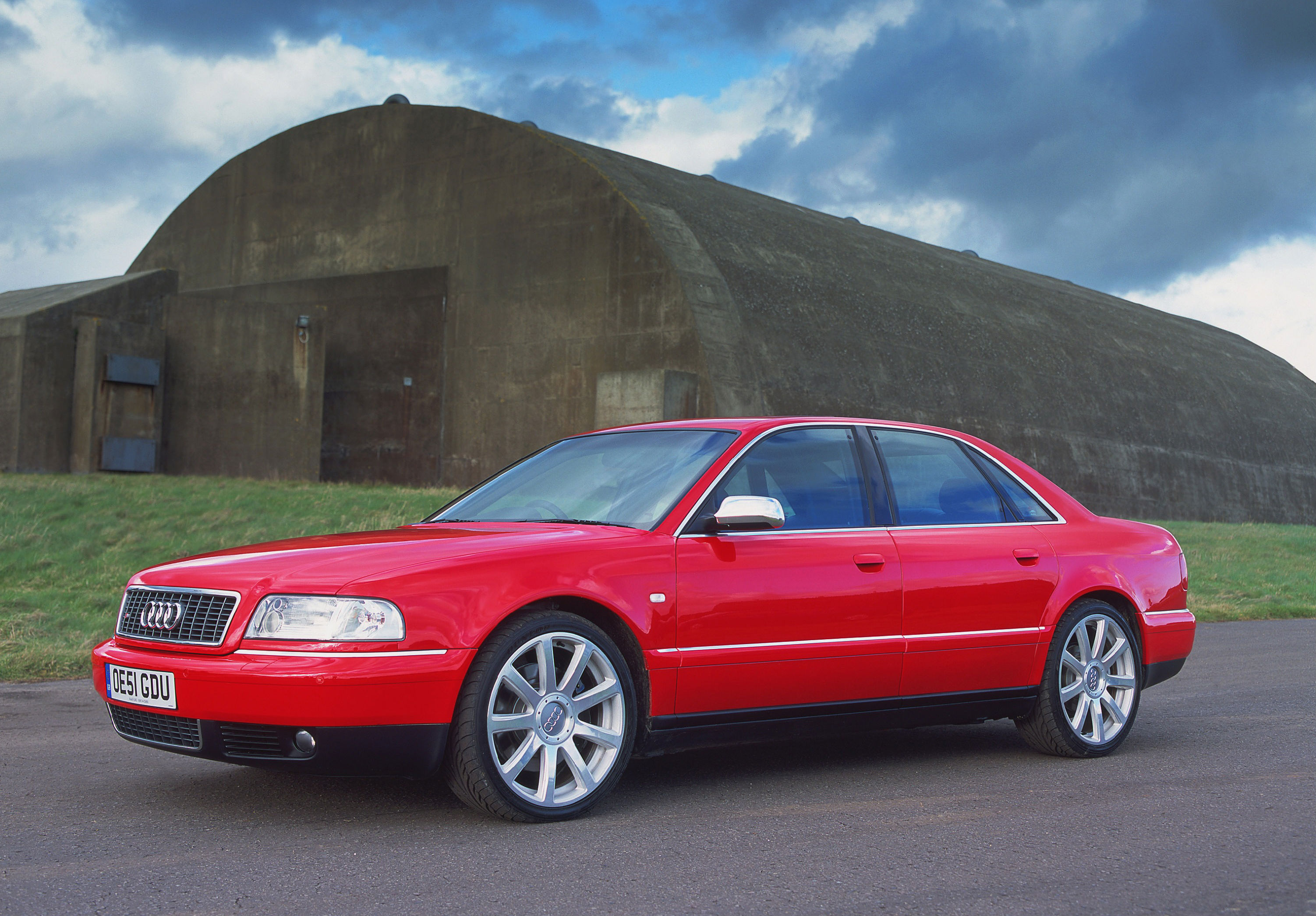 You’ve watched Ronin, right? If so then you’ll already by all too familiar with the Audi S8 Quattro, the getaway car of choice back in late ‘90s continental Europe! The traits which made this such an impressive car back then can now be had for a fraction of the price when new, though 5k is the entry level price for anything you’d want to seriously consider buying, which means subtle styling, a comfy yet dynamic ride and effortless performance thanks to the near bulletproof 4.2 V8 up front, and all underpinned by sure-footed Quattro handling. Just make sure you get nice and friendly with your local Audi specialist – and maybe purchase a few shares in OPEC if you can. 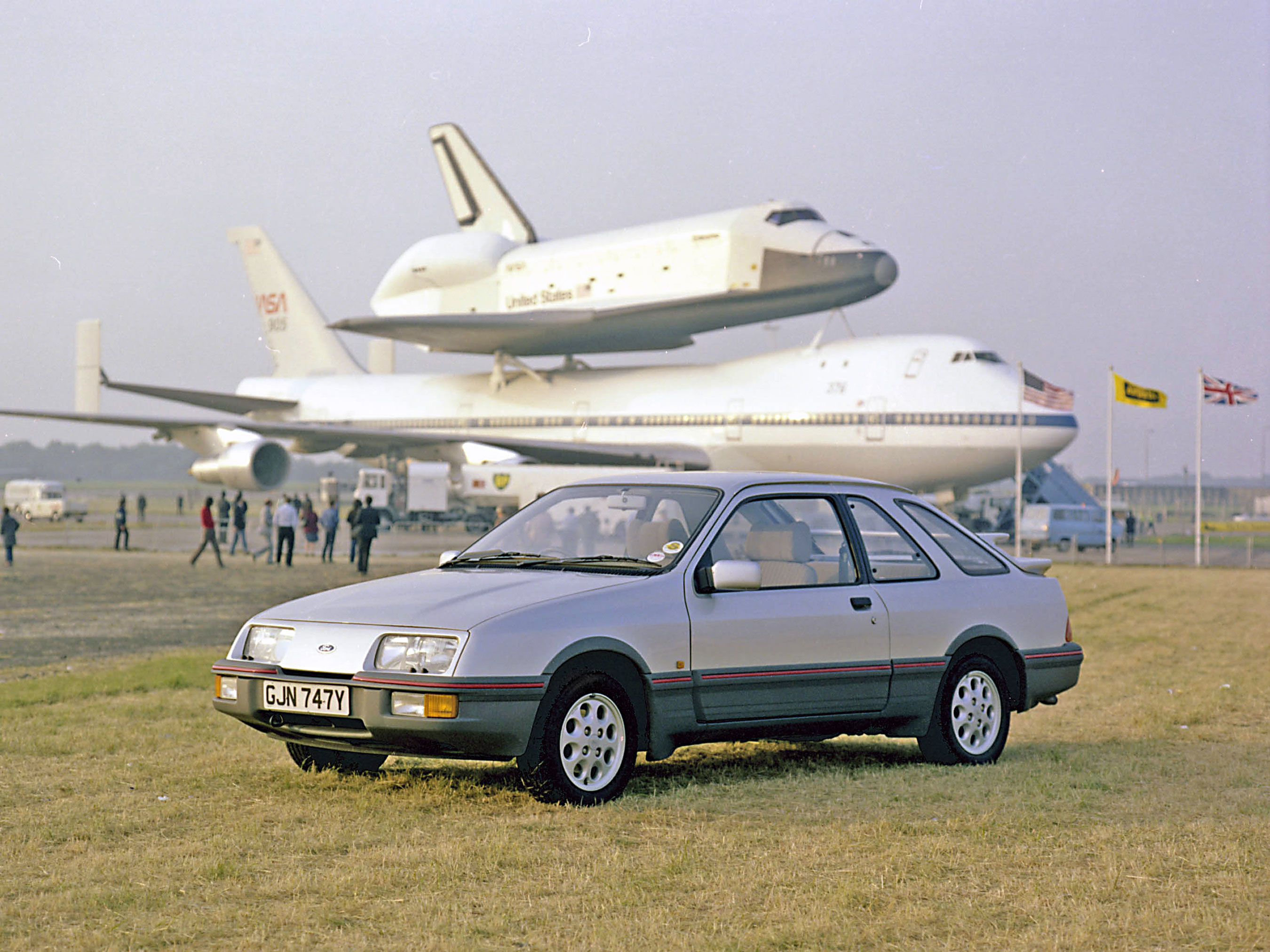 Sierra Cosworths haven’t been within our budget since Tony Blair was in power so you can forget any YB-powered dreams, but the other, all too often overlooked performance variant of the Sierra can still sometimes be had for £5000, the XR4i. Of course performance is a relative term – the 2.8 V6 Cologne puts out a rather miserly 160bhp, hardly enough to win you pub bragging rights in this day and age, but there’s more to this car than outright grunt. That oh so ‘80s bi-plane rear wing has never looked cooler and the same could be said of the chunky plastic bodywork mouldings; you might not be winning many drag races with your 30-odd year old ‘jelly mould,’ but you’ll look superb trying. 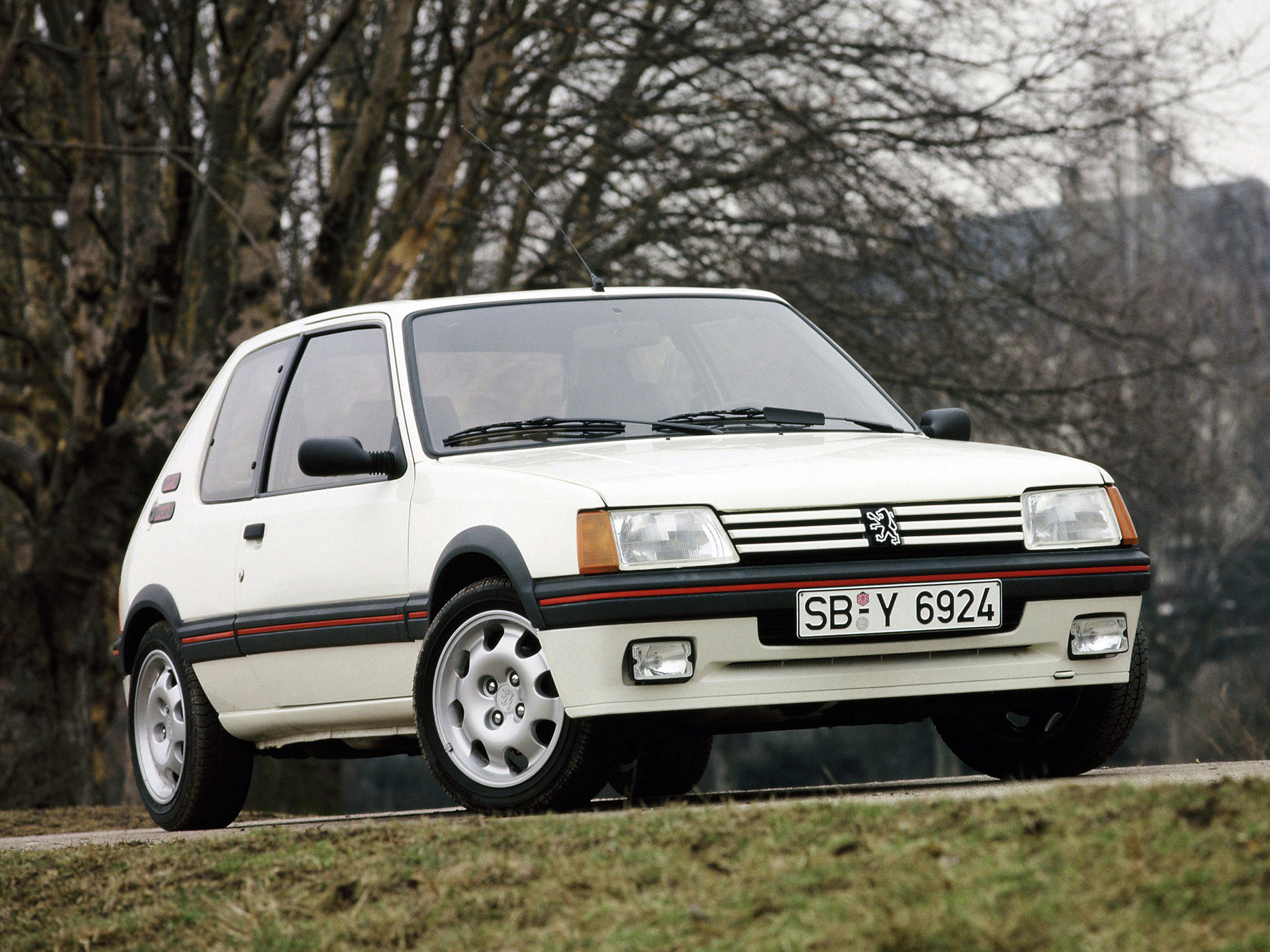 Along with the Mk2 Golf GTI, Saab 900 and Sierra mentioned elsewhere on this list, the Peugeot 205 GTi is one of those models which won’t stay within our budget for much longer – pristine 1.9 engined cars are already being advertised for a full £5000 over our self-imposed limit! Buy sharpish and you’ll be investing in another of the all-time great hot hatches, one famed for its legendary (if unforgiving) handling, Pininfarina-penned looks, the best wheels ever fitted to a new car as standard, and brilliant engine. In fact, the smaller engined variant might be the best of the bunch, with many preferring the rear world nature of the 1.6 to the 1.9. 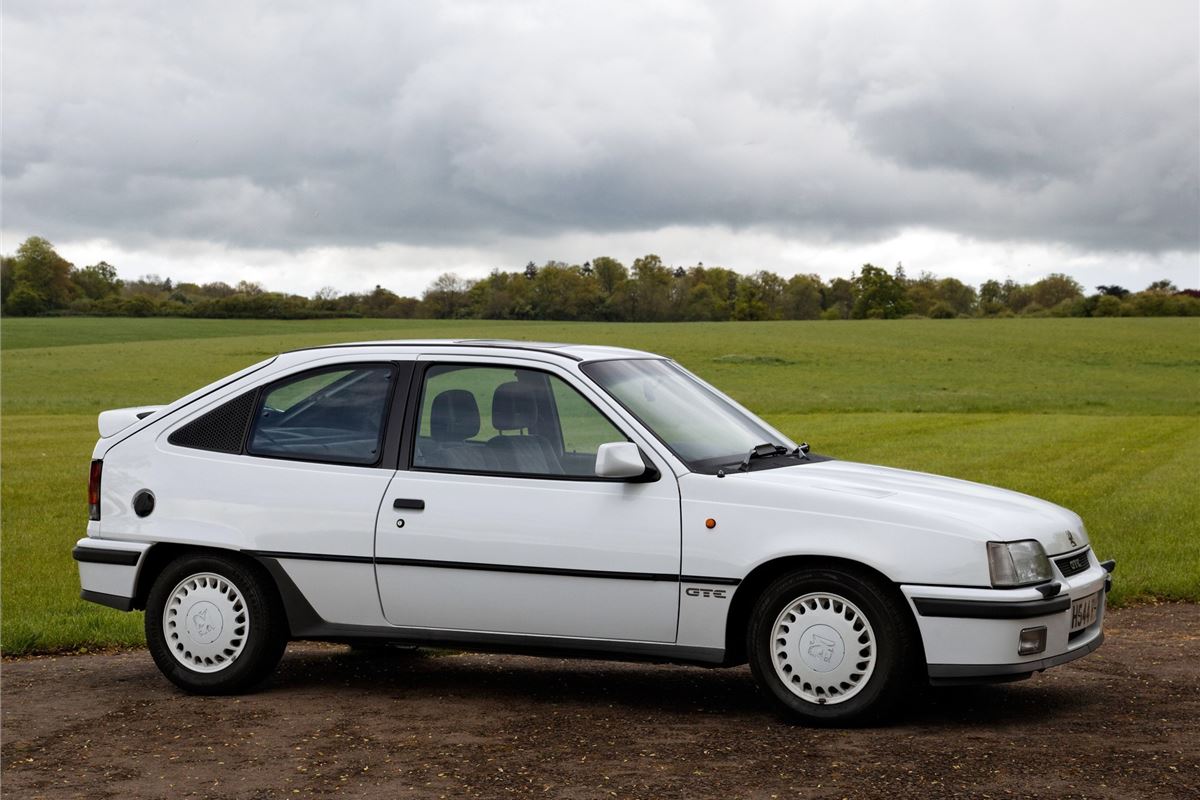 If the Mk2 Golf GTI was a scalpel (precise and refined), then Vauxhall’s take on the late ‘80s hot hatch, the Astra GTE 16v, was a swan-off shotgun! Pokey in 8v guise, the Mk2 GTE really came into its own with the introduction of the GTE variant in 1988. The engine itself was the infamous 20XE, a Cosworth developed 2.0 making 150bhp, a staggering amount when Porsches of the era made barely double that. This was coupled to a chassis which could barely handle all that grunt, though massive improvements can be made via careful aftermarket additions. 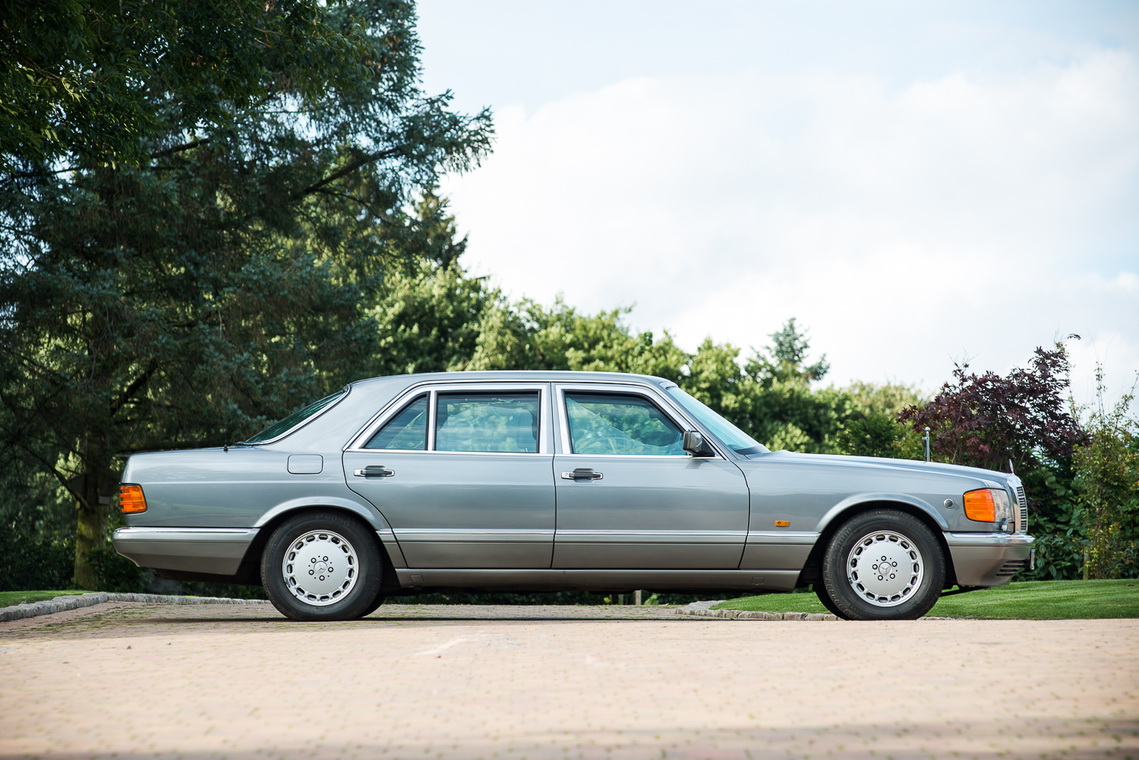 Something to counteract the glut of hot hatches on this list, the 560 SEL dates from a time when over-engineering was a phrase well and truly embraced by Mercedes Benz, which means that, providing you buy a good one in the first place, your purchase should go on for years to come. There are a surprising number hovering around the magic 5k barrier so look hard and you’ll probably find something suitable, and then you can look forward to many years of effortless wafting from petrol station to petrol station.