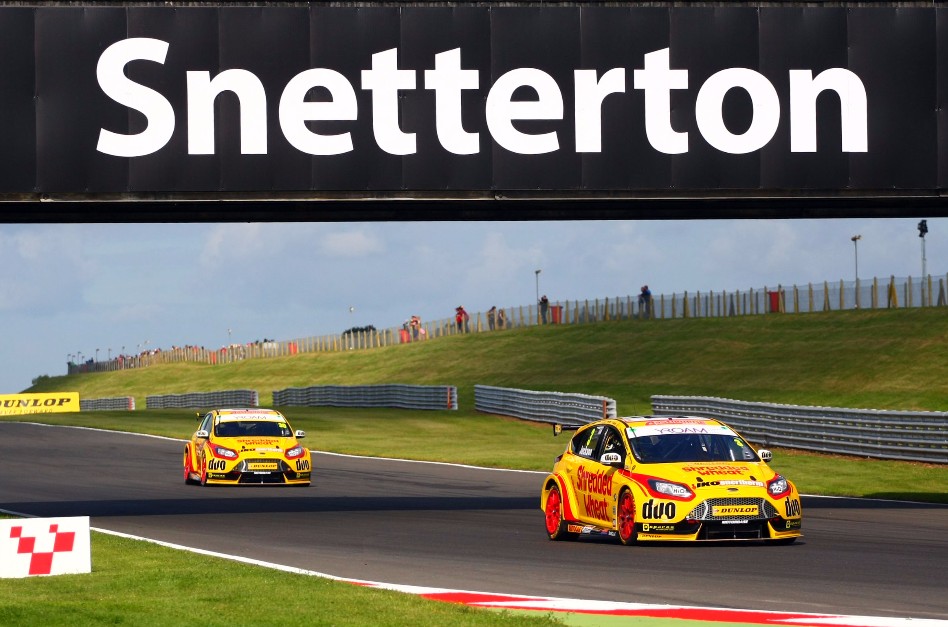 Team Shredded Wheat Racing with DUO has extended its lead at the top of the Independent Teams’ standings with a brace of independent race wins during rounds 16, 17 and 18 of the Dunlop MSA British Touring Car Championship at Snetterton (July 29/30).

The Motorbase-run squad collected a solid haul of points over the weekend, with Mat Jackson scoring in all three of Sunday’s races on the Norfolk circuit, taking two top four finishes – both of which were Independent wins – in the #3 Ford Focus ST.
An unfortunate mechanical issue rued Jackson’s opportunities during Saturday’s qualifying session, when despite looking strong for a top 5 finish, the 36-year-old was forced to pit after just 5 laps and sit out the remainder of the session, eventually settling in 12th.

Starting from P13 after a late change to the grid for Sunday’s opener, Jackson’s race got off to bad start after taking a heavy hit from Newsham’s Chevrolet on lap 2, dropping him down to 19th. A spirited drive saw the #3 Focus move up through the field as the race unfolded, breaking into the points to finally cross the line in P11.

A trademark fast-start off the line from Jackson in race two pitted the #3 Focus into 6th by the end of the first tour of the circuit. Holding off challenges from the fast-charging Hondas, the Warwickshire-man chased down the factory BMWs before dropping back to 7th at one point as they battled for position. A textbook move on Goff on the penultimate lap of the race saw Jackson steal into 4th place – a position he held to the flag to take his first independent win of the day.

With the reverse grid draw slotting the #3 Focus ST into 5th for Sunday’s closing race, Jackson did well to avoid the opening lap dramas as the front-running pack challenged for the race lead. Taking a side-on hit on lap 2, Jackson fell back to 7th and had to defend hard from independent challenger Ingram. Lap 5 delivered the perfect opportunity to move forward with the Team Shredded Wheat Racing with DUO driver charging up the inside of Neal and Cole to take P5 as the pair tangled at Williams. Jackson went on to take his second 4th place of the day and 2nd successive Independent race win.

Team-mate Martin Depper’s weekend proved to be a slow-burner with the Midlands-based driver struggling to find the best set-up on his #30 Focus ST during qualifying. Starting from P30 in race 1, Depper made steady progress over the weekend – moving forward in each of Sunday’s three races, ending the day with his highest-placed finish of P17 in race 3.

Having added to its 2017 championship points tally in all three races, Team Shredded Wheat Racing with DUO has augmented its lead at the top of the Independent Teams’ Championship, with Mat Jackson also moving up into 2nd in the Independent Drivers’ standings. The Dunlop MSA British Touring Car Championship heads across the border for its next instalment when it arrives at Knockhill Racing Circuit in Scotland for rounds 19, 20 and 21 on August 12/13.

Team Manager Oly Collins:
“The weekend finished up pretty well for us in the end. When you end qualifying out of position this season, it makes for a very difficult race day, starting on the back foot. Mat and the team did a sterling job to get three good finishes and two more Independent wins. Martin’s pace also improved as the day went on and he showed some great pace but again suffered from being out of position on Saturday. We’ve strengthened our Indy lead this weekend however, and go to Knockhill with high hopes.”

Mat Jackson #3:
“It was a shame that we didn’t get the full distance in qualifying. A minor issue put us out, and I’m pretty sure that we could have made the top 5 or 6, so to have to settle for P13 was pretty hard to take. Race 1 was always going to be a challenge to come through from where we were and we took a big hit early on which knocked us back even further but we managed to fight back to 11th.

“We made a big change to the car for race 2 which enabled us to hold our pace and race through to 4th for our first Independent win. Unfortunately I got turned around on the hairpin in race 3 which bent the front of the car but thankfully we managed to wrestle it round and finish in P4 again collecting our 2nd Indy win.

“Hopefully we can take this form forward with us to Knockhill, top four finishes and podiums are where we need to be to make sure that we nail the Independents’ Championships.”

Martin Depper #30:
“Looking back Snetterton is probably my bogey track, but we made progress in every race today, finished all three races and avoided a lot of contact along the way. Unfortunately I was on the back foot from qualifying and whilst I was building up good pace in the first two sectors, it was sector 3 where I was losing out on each lap.

“Credit to the team though, we made tweaks to the car which helped move us in the right direction; we’ve plugged away at it all weekend and pushed further up the order in each race.