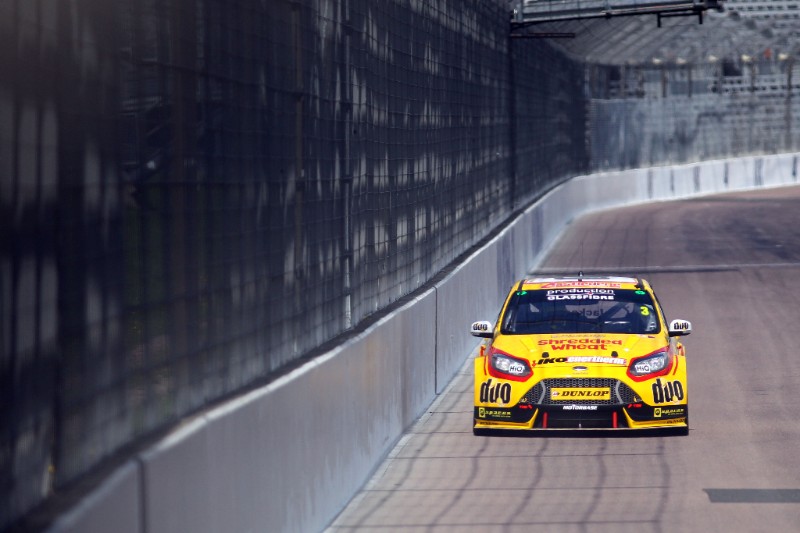 Team Shredded Wheat Racing with DUO climbed back to the top of the Independent Teams’ Championship standings at Rockingham this weekend with a celebratory return to the rostrum during rounds 22, 23 and 24 of the Dunlop MSA British Touring Car Championship (August 26/27).

A third podium and sixth Independent win of the season for Mat Jackson in race two helped the Wrotham-based squad to the top of the tables and the Motorbase-run outfit leaves Northamptonshire with a narrow, but all-important 9 point lead ahead of the championship’s penultimate meeting in three weeks’ time.

Heading into Saturday afternoon’s qualifying session off the back of a strong FP2 performance, Jackson’s pace – less than half a second off pole – earned the #3 Ford Focus ST an 11th place spot for the start of Sunday’s opening race, with team-mates Rory Butcher and Martin Depper in P21 and P29 respectively.

A blistering start from Jackson in race one propelled the #3 Focus up into 8th place by turn 1, and the 36-year-old had made his way up into P7 before the grid completed its first tour of the circuit. Unfortunately the gap to the lead pack proved too great to close in on and Jackson crossed the line in 7th. Both Butcher and Depper struggled with the hard compound tyre in the opening race. With their pace suffering as a result, and with both collecting damage from robust competitor moves, the #6 and #30 machines recorded P25 and P22 finishes.

A brave attack from Jackson around the outside at turn one at the start of race two was rewarded with a move straight up into P4.  A further clean pass past Sutton saw him steal into third before a reckless lunge from Cook forced Jackson off the circuit, with the Warwickshire-man having to take evasive action to avoid a dramatic, race-ending accident. Having dropped down into 4th as a direct result of the incident, Cook then collided with Neal’s Honda on the following lap, with the resulting crash ending the race for both. Regaining a P2 spot, Jackson went on to deliver a defensive master-class as he held off the faster BMW of two-time BTCC champion Turkington for the closing laps – eventually taking 2nd just 0.292 seconds ahead of the BMW – securing his 6th Indy race win and third overall podium of the season.

Butcher’s steep learning curve into the BTCC continued with the Scotsman on the receiving end of some forceful moves in the mid-pack. Battling through from 25th, the 30-year-old managed to avoid the various on-track incidents to bring the #6 Focus home in P19. Unfortunately Depper’s early progress was short-lived when he was hit and forced into a spin by Whorlton-Eales; dropping the #30 Focus back down into P30. An excellent fight-back from the Midlands-based driver saw him find his way from the back of the grid to eventually take the flag just behind his team-mate in P20.

Starting from 6th following the reverse grid draw, the combination of running on the hard compound tyre whilst carrying 66kg of success ballast left Jackson struggling for pace in race 3. Coming under fire from the lighter charging pack, it became a case of damage limitation for the #3 Focus with Jackson fighting hard to stay within the points scoring zone and he had to settle with a P15 finish.

Butcher fared better in the final race. In-spite of being caught up in an opening lap melee between two competitors, the Fife-based racer piloted the #6 Focus forward into the points as the laps unfolded, taking P14 at the flag. Regrettably Depper’s luck gave out once again in race three. After a strong start in the #30 Focus, heavy contact from behind from Whorlton-Eales resulted in damaged bodywork and a right-rear puncture – forcing Depper to pit and effectively ending the third Focus STs race run.

The weekend’s results mean that Team Shredded Wheat Racing with DUO reclaims its lead at the top of the Independent Teams’ standings, with a nine point lead ahead of its nearest challenger. Mat Jackson currently lies third in the Independent Drivers’ Championship and eighth overall. The Motorbase-run squad now has a short three-week break before the Dunlop MSA British Touring Car Championship heads to the home of British Motorsport, Silverstone, for rounds 25, 26 and 27 on September 16/17.

Team Manager Oly Collins:
“Our pace has been very strong today and we came away with some great results that put us back in the lead of the Indy Teams’ championship. Mat’s drive in the second race was simply outstanding. Both Martin and Rory have had good pace, but sadly have not been able to convert them into deserved results.

“Unfortunately we’ve also been on the receiving end of some dreadful driving standards. A lot of the serious incidents are still going unpunished, but fair drivers are being penalised for really minor incidents. The balance is wrong. All 3 of our drivers were beaten up today, which cost Martin and Rory in particular much better results. It’s expensive to repair these cars and we’re not alone looking at some of the guys on the grid.

“I think a few drivers left their brains at home today.”

Mat Jackson #3:
“Qualifying in P11 was ok – it was a tough session with the times as close as they were. I think we could have improved on that, but come race day the car was very strong. To pick up a P7 in race one was great and to go forward from that in race two and grab a podium was mega. Unfortunately as good as the car was, we just can’t touch the Subaru, which is just a joke.

“Race two was very nearly ruined by an incident with [Josh] Cook which scuppered our progress and ability to go on and challenge for the win. He then managed to go and take himself and Matt Neal out of the race on the following lap so what goes around, comes around. Running the hard tyre and ballast in race three, we struggled like mad with the grip and got hit from pillar to post by everyone. It was good that we managed to salvage some points for the championship, but just not really the way that we wanted to finish the day.”

Martin Depper #30:
“We had to kind of rescue the day today after Saturday didn’t go to plan. We went on the hard tyre in race 1 and did ok. Race 2; it all kicked off in front of me and I thought I’d made it through unscathed but unfortunately I ended up getting collected which put me dead last. That was frustrating as I think we had the legs to get up into the points.

“The car was good out of the box again in race 3, we nipped up a few places and then the AMD Audi tagged me again and pushed the bodywork into the tyre which caused the puncture. From then on it was a bit of test exercise really, being 2 laps down we just tried to use the time to get some data. We tried a few new things that clearly worked, so we’ve still come away with some positives from a tough weekend.”

Rory Butcher #6:
“I guess 14th is actually a high point from where we started this weekend. We had a tough start in qualifying and race 1 and maybe went in the wrong direction a bit with the car in race 2, which really put me on the back foot. We took a lot of hits again this weekend though and the boys have worked so hard to get the car turned around for me after each race today.

“I’m just learning more every time I go out. My aims for next time are to try and start off on that note earlier in the weekend, so that I have a good practice and go into qualifying with lots of confidence so we can start further up the grid. When it’s all right and the confidence is high then it’s all going to have to click together. Hopefully that will be at Silverstone.”