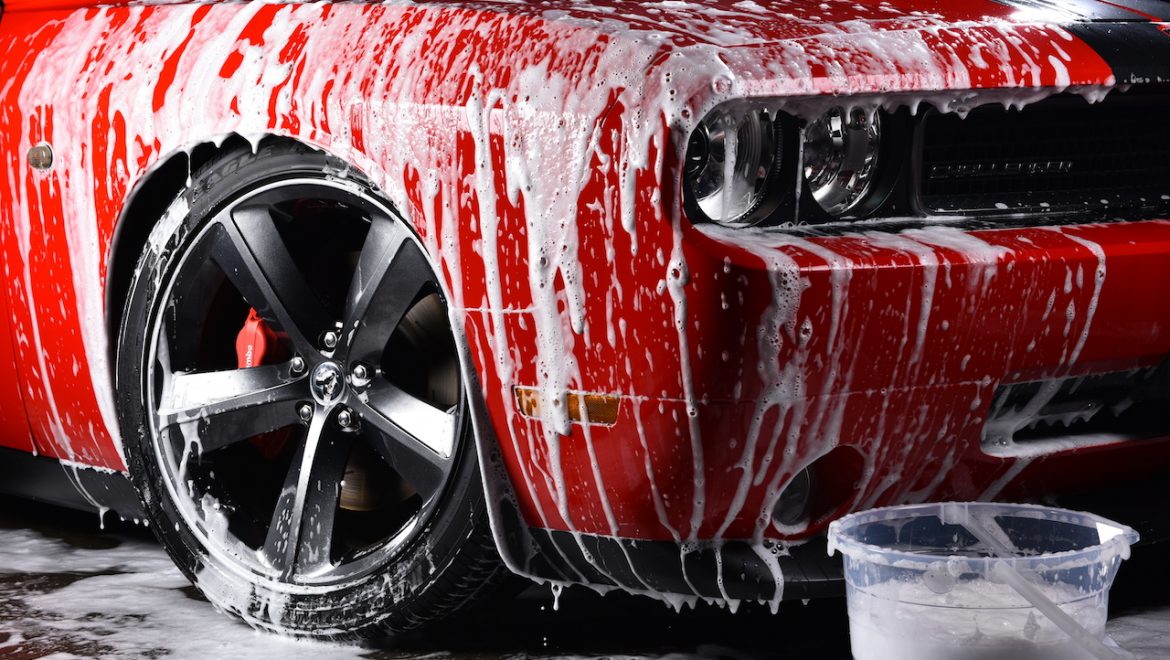 The fact that the car care industry moves forward at such a ceaseless pace has wide ranging ramifications for those firms tasked with selling car care products, Autoglym very much included! Indeed, Autoglym has invested heavily in order to retain its position at the vanguard of the car cleaning world, and evidence of this can be seen in two of our most beloved offerings – Ultra High Definition Shampoo (a relatively new addition to the Autoglym fold) and Ultra High Definition Wax, something of an instant legend within the detailing community.

The Autoglym Ultra High Definition (UHD) range was developed in response to the ever increasing levels of sophistication seen in the aftermarket car care world, and doing so provided our product development team with something of a challenge; namely how best to develop class-leading shampoos and waxes which were both effective and easy to use, and also demonstrably better than the previous range toppers – our HD offerings. Marrying these two traditionally tricky to reconcile ideals has tested our development boffins in every sense, but the results are more than worth it – both UHD Shampoo and UHD Wax have proven to be among the most effective products in their respective fields, which is why we thought you might like to know a little more about them. 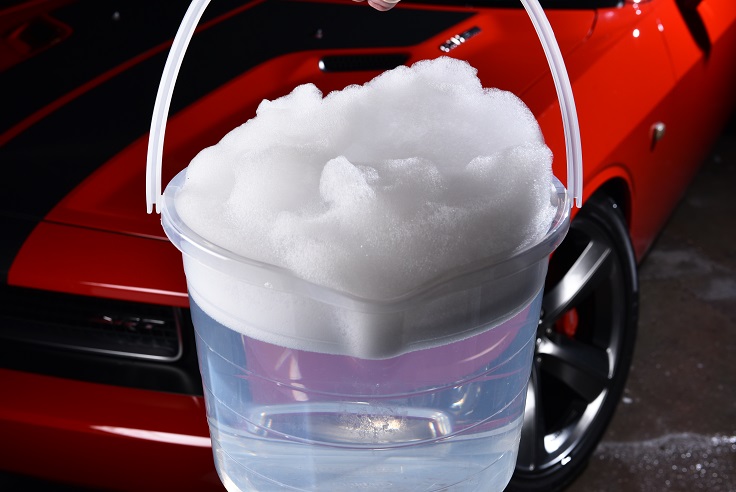 As we’ve already mentioned, UHD Shampoo was only officially unveiled recently, off the back of one of the most intensive development programmes of any Autoglym product. The reason it took so long was the need to imbue UHD Shampoo with the kind of lather potential that has to be seen to be fully appreciated – seriously, you won’t have seen this much foam outside of an airport fire or a foam party circa 2001! Better yet, UHD Shampoo’s foamy lather has been developed to generate creamy, dense, ‘clingy’ and long-lasting suds that feel wonderful to the touch, as well as providing the perfect way to safely pull dirt and detritus from the bodywork, allowing the sponge or wash mitt to glide effortlessly across each panel.

There are many other reasons why UHD Shampoo is a cut above pretty much every other commercially available automotive shampoo; one being the fact that it smells divine, a beguiling tropical redolence that wouldn’t smell out of place in your morning grooming routine. It’s also been formulated to be both kind on your car, your skin and the environment, hence its pH neutral makeup. Best of all, it provides unparalleled cleaning performance without stripping or removing previously applied wax and polish from bodywork.

Last but not least (and in line with other UHD products), UHD Shampoo looks the part, even shipping in an eye-catching presentation box that wouldn’t look alien in either your whisky cabinet or en-suite dressing room. It means that UHD Shampoo makes the perfect automotive gift for the car care nut in your life – even if that happens to be you! 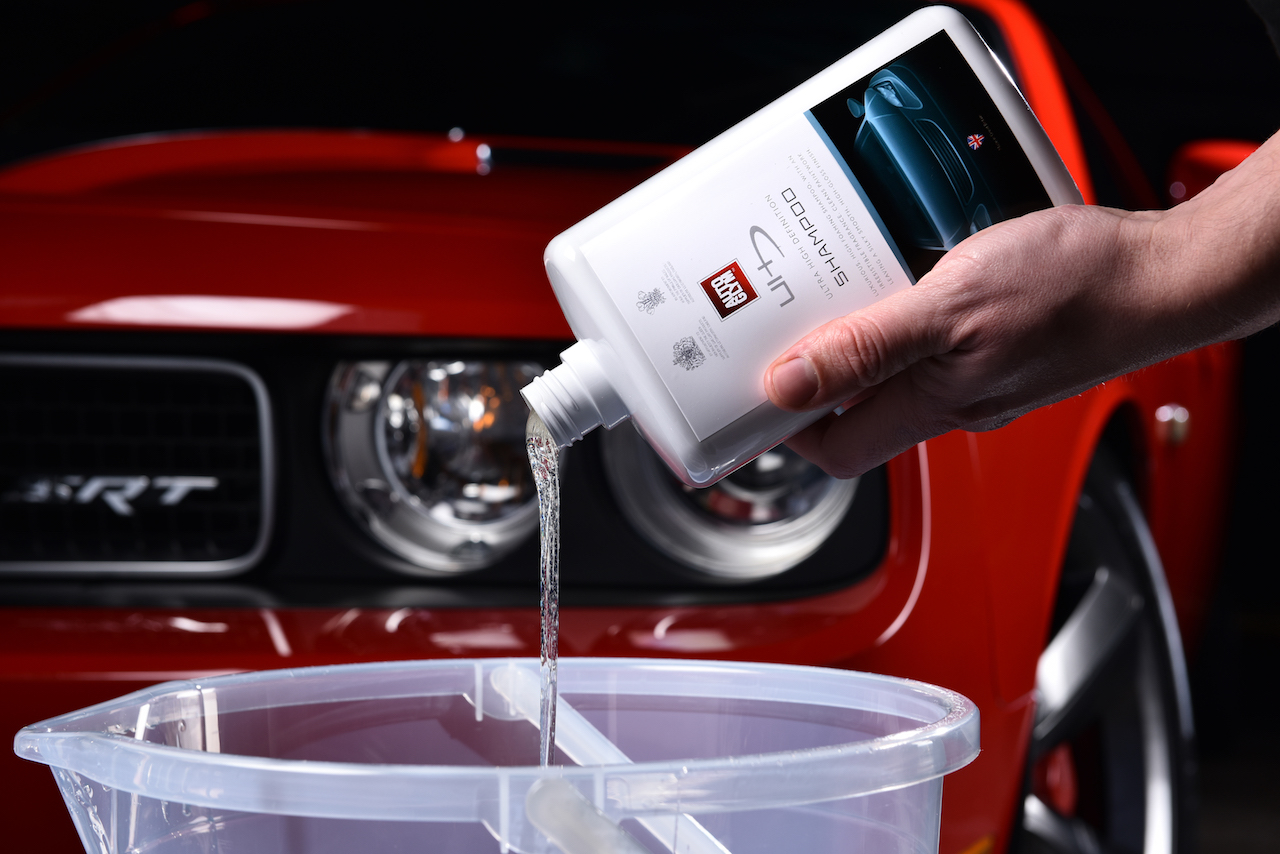 UHD Shampoo is easy to use and quick to work, meaning you can have your car looking showroom fresh in no time at all

UHD Shampoo has been designed to be as simple to use as it is effective; start by emptying 4 capfuls into 10l of warm or cold water, before applying to a freshly hosed and rinsed car, working from roof downwards. It’s important that the car in question is relatively cool, while best results will be gained from moving the sponge or wash mitt in straight lines to ensure even coverage. Don’t allow the shampoo to dry on the car. Then, as a final stage, rinse well with clean water and dry with one of our Hi-Tech Microfibre Drying Towels to prevent water spots.

Click through to learn more about Autoglym UHD Shampoo. 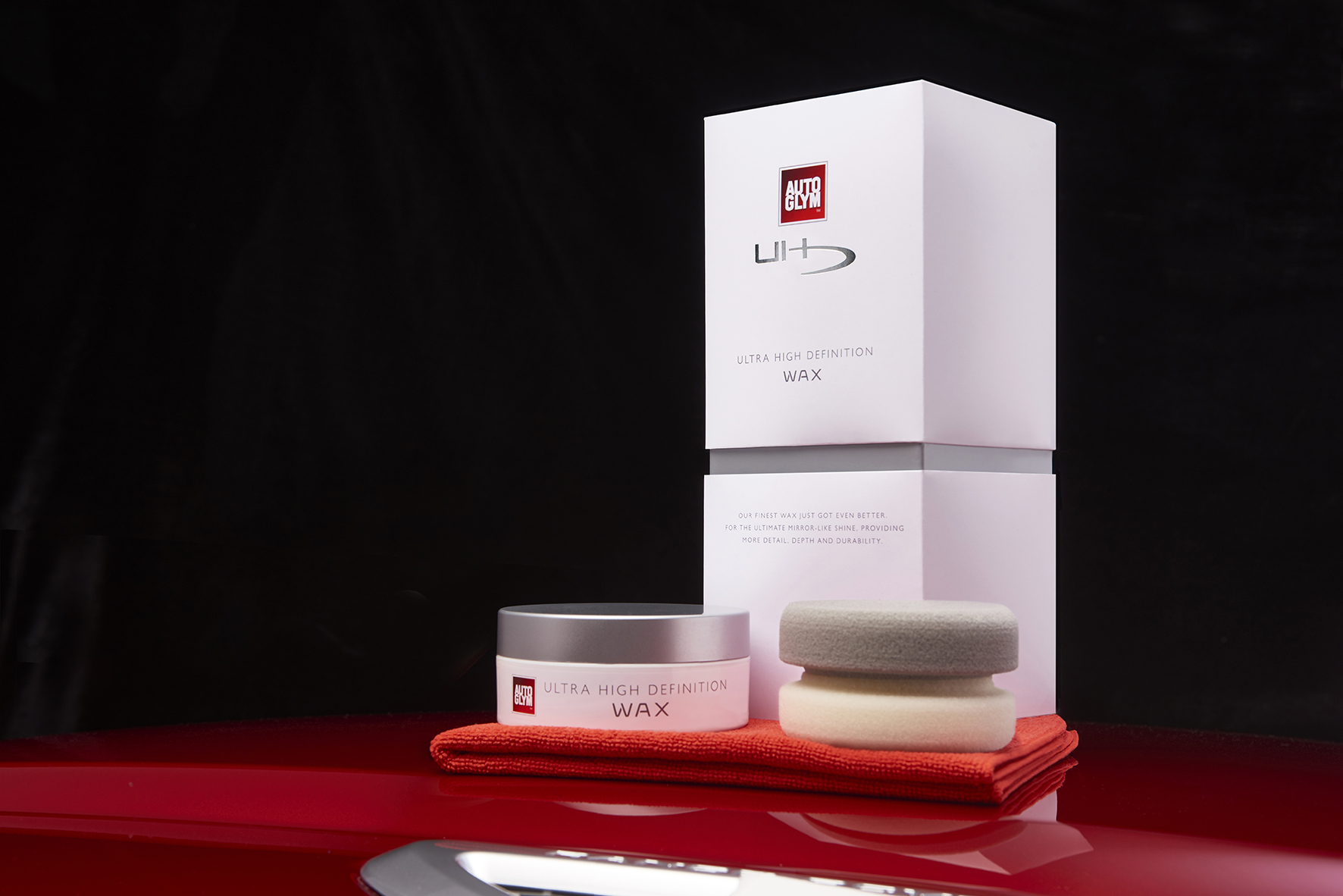 UHD Shampoo might have hogged much of the limelight in recent years but that doesn’t mean that the original UHD product, Ultra High Definition Wax, is any less remarkable or effective. Developed upon the oh-so-solid foundations of HD Wax, UHD takes things several stages further in an attempt to provide unrivaled paintwork protection, all while imbuing paintwork with a deep lustre that really ‘pops’ – endowing the recipient car with a real showroom fresh demeanor.

UHD Wax is so effective because of its specially created carnauba wax formulation, something cooked up by our product development boffins over several months and now very much a protected company secret. Think KFC’s eleven herbs and spices, just without the grease and intense feelings of regret shortly afterwards! The said carnauba formulation isn’t merely an effective bodywork product, it’s also cost effective – a single pot of UHD Wax can last for many years when used and stored correctly, with a single application good for as much as 6 months!

While UHD Wax’s most significant trait is its ability to transform automotive bodywork, it’s nothing if not multi-talented, the ease with which it can be applied being but one example. UHD Wax is actually even easier to apply than its forebear, and with the handy ergonomic wax applicator that comes in the kit, waxing becomes a pleasure rather than a chore. 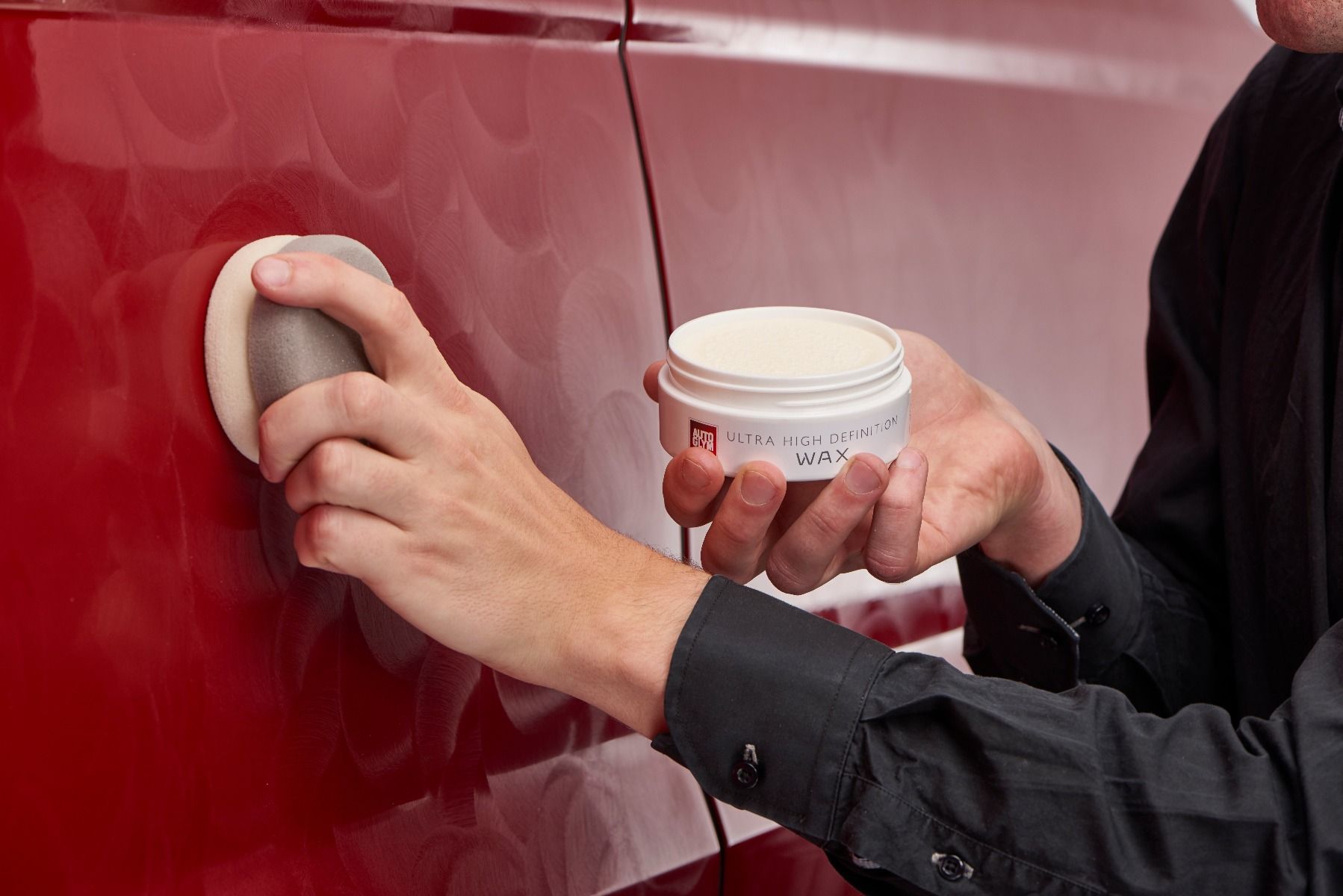 The supplied applicator is key to a successful application of UHD Wax, so begin by dampening its white side, then dabbing it into the pot and giving a quarter turn. Apply to clean and dry paintwork in a light circular motion, making sure that the layer left behind is both thin and even. Don’t be tempted to over apply UHD Wax – not only is it a waste of product and money, it’ll make the wax more difficult to buff later on. Leave the UHD Wax layer to dry for 10-15mins before buffing to a high gloss finish using the supplied Hi-Tech Finishing Cloth, making sure to turn it frequently for even coverage. After use, wash the applicator in a mild detergent, rinse and allow to air dry.

Click through to learn more about Autoglym UHD Wax. 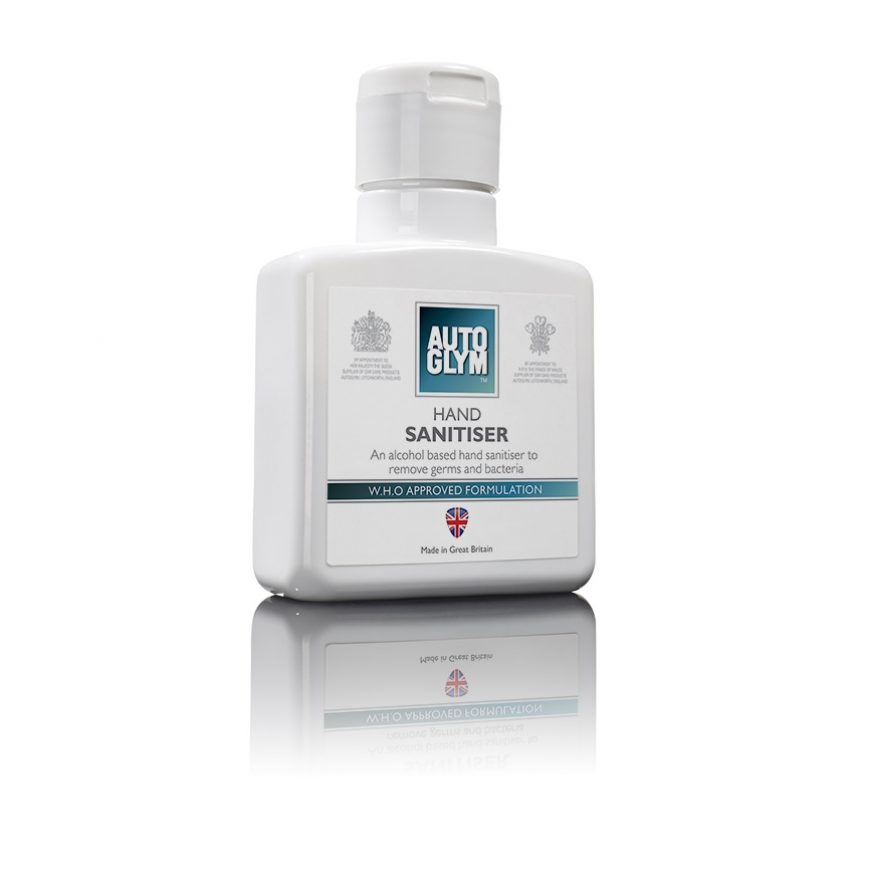