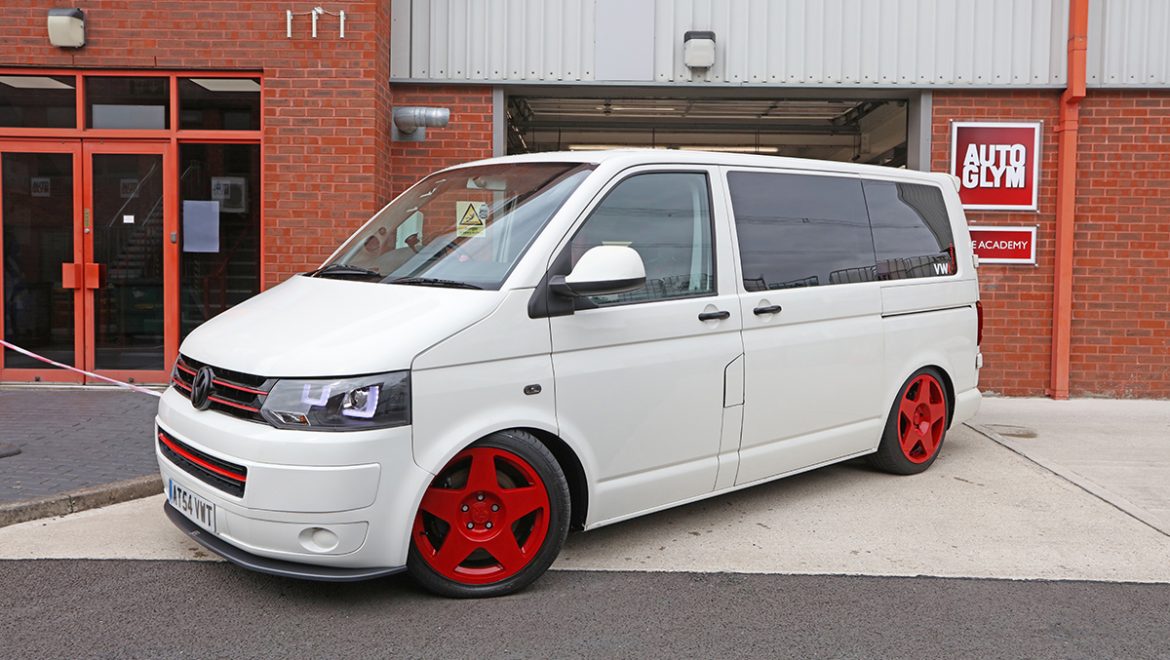 The VW van has for many years been a classic amongst the free-roaming, surfing, festival, mountain bike and camping fraternity. Ever since the now iconic Split Screen bus broke cover in the mid to late ’50s, VW devotees from around the globe have idolised this humble commercial vehicle turned leisure pursuit.   While the new-age T4, T5 and T6 models arguably aren’t quite as well revered as the Split Screen and Bay Window models, the popularity of the 1996 onwards derivatives is noticeably on the rise with a younger generation who can’t quite afford the lofty residuals of the pre-80s variants. 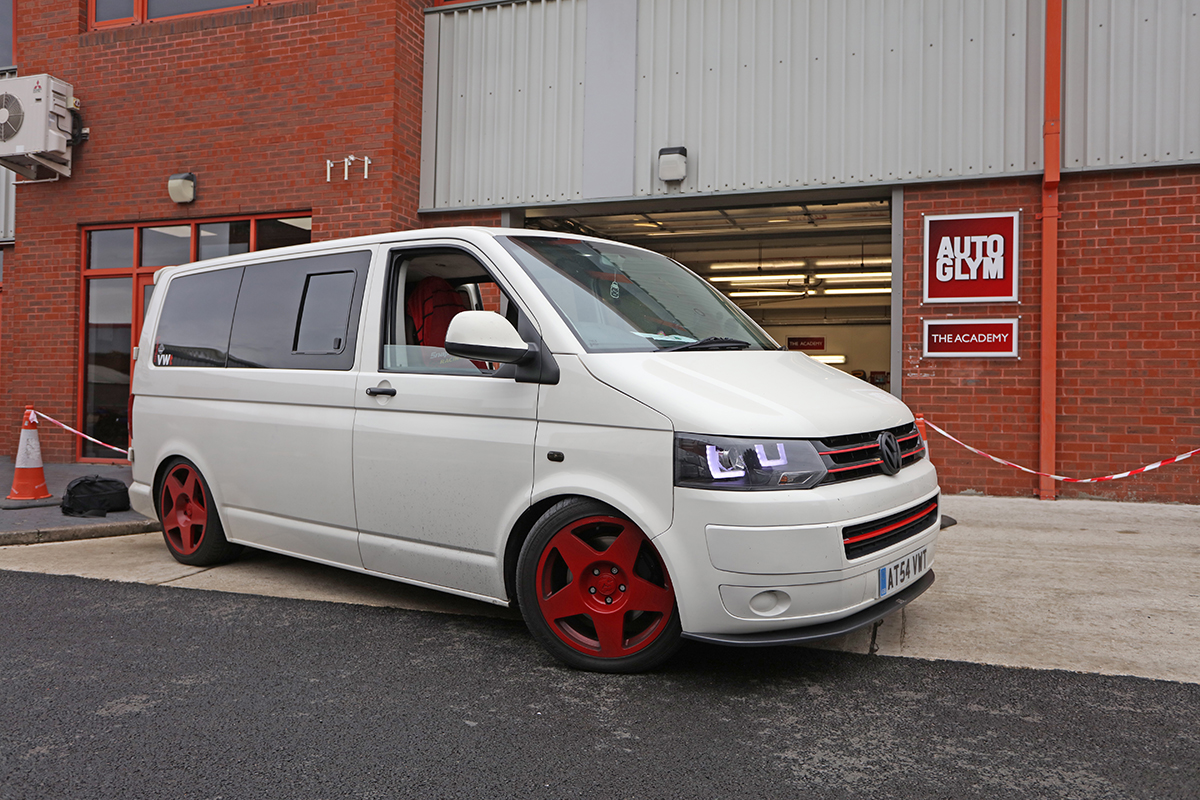 The T5 before it went in to the Autoglym TSS detailing bay. Following four weeks of daily abuse it was looking rather filthy

So, when Autoglym said they’d like to clean my lightly modified 2007 VW T5 and give it a winter time clean and protect overhaul, I naturally jumped at the chance. 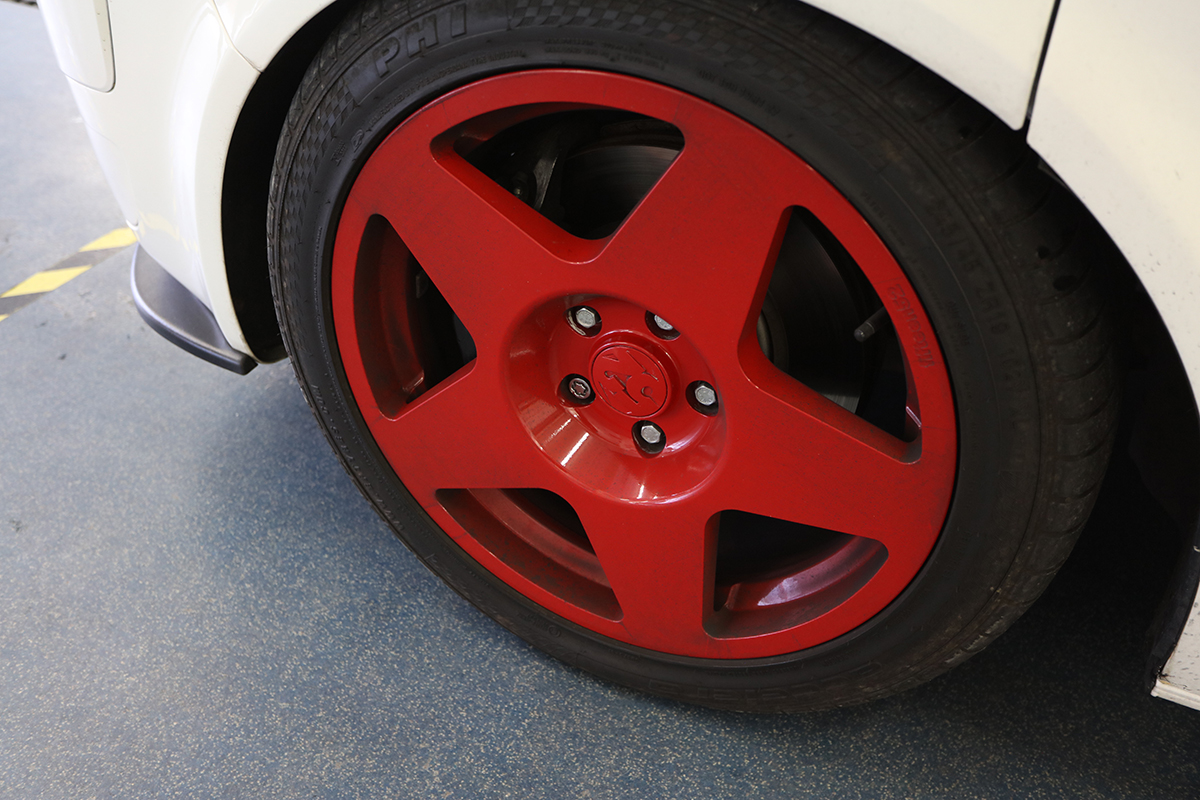 Brake dust and daily road contaminants had really started taking a hold over the wheels. Luckily they’d been coated in Autoglym Wheel Protector months prior 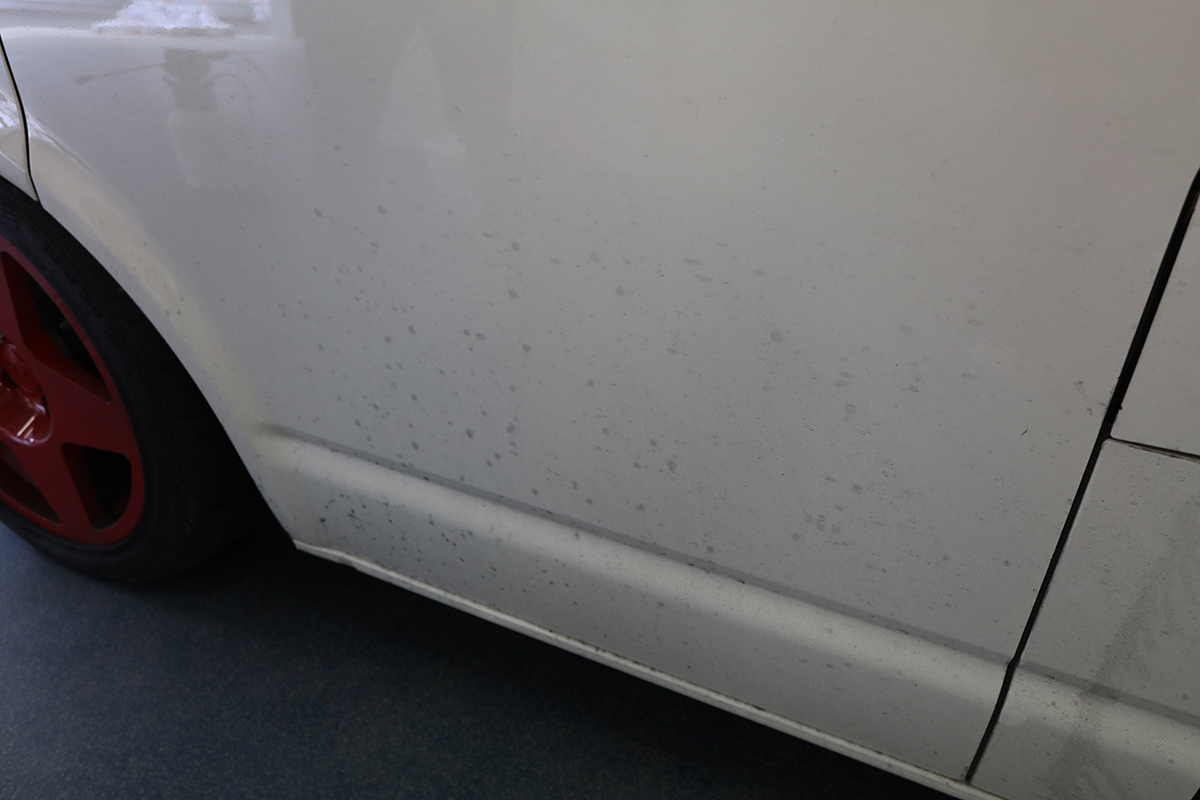 Previous applications of tyre shine that hadn’t been left to dry properly before driving had found their way up the side of the van.

Having accrued around a month’s worth of dirt, road film and general debris, both Karl and Martin had their work cut out to make the Grauweiss (L902) paintwork look shiny once again.  With 220,000 miles on the clock and no known bodywork carried out from new – apart from a front-end facelift to the later T5.1 bonnet, lights and grille, I was dubious as to whether a day spent at the Autoglym academy would be able to return the shine.  I need not have worried. The lads knew exactly how to get the best from the aging paint.

Karl started by measuring the depth of the paint in microns to ascertain whether it could be mopped and polished. It was decided to just strip off the existing wax and start afresh without resulting to a DA polisher

First thing first, a liberal application of TFR was applied to start dragging the really stubborn dirt from paintwork. Once hosed off, the lads applied an extra thick coating of Polar Blast Snowfoam to really start lifting the grime.  Active Insect Remover was also liberally squirted onto the front bumper to remove any nasty creepy crawlies before being agitated with a wash mitt and hosed off.  A bucket of UHD Shampoo was then lovingly massaged around the Van.  Having lifted all of the dirt and traffic film from the vehicle, attention turned to the engine bay where Engine and Machine Cleaner totally restored the sheen to the once scruffy engine and surrounding areas. In fact the engine bay was the biggest surprise of all.  I can’t believe what a difference a few minutes with some soft hair brushes and the right sort of product made in here. Truly staggering. 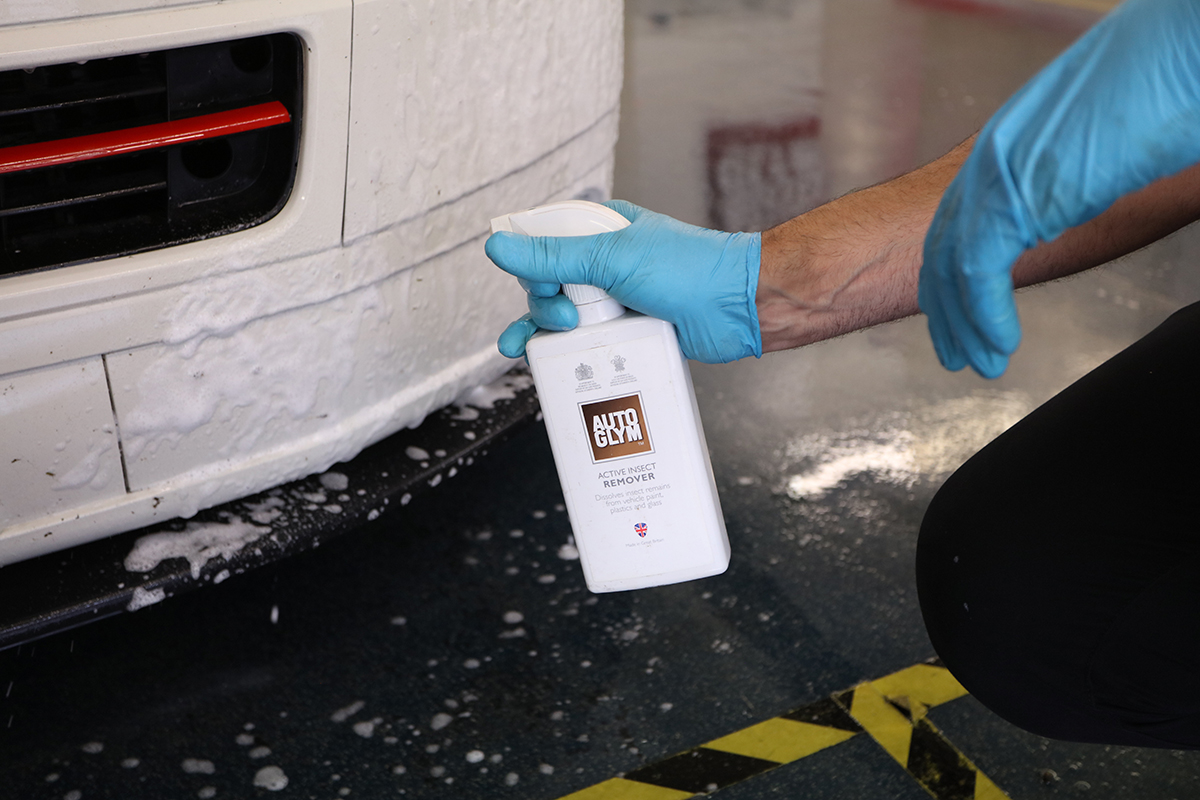 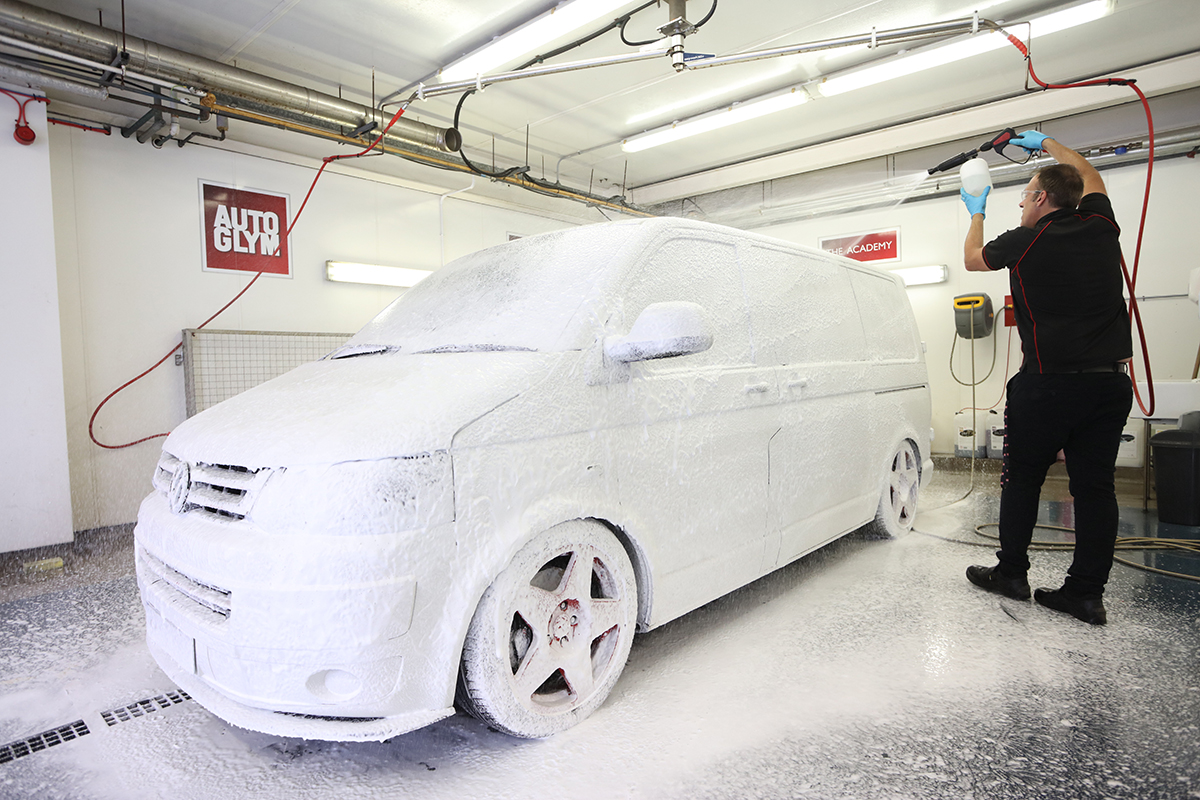 Polar Blast was used after a liberal coating of Multiwash TFR 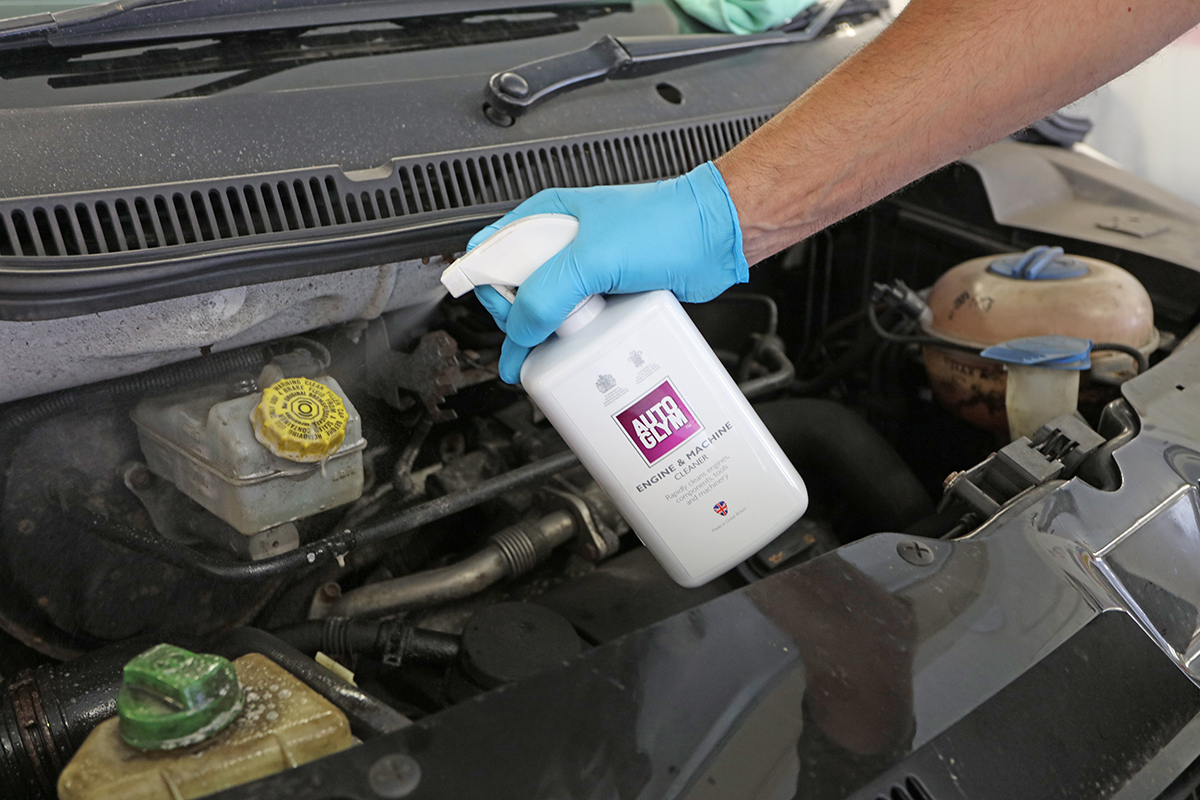 While Karl and Martin were on a role, they also attended to the door hinges using some Intensive Tar Remover squirted onto some polishing rag and massaged it into the offending areas. Once hosed off with clean water the inner door area looked brand new.

Custom Wheel Cleaner was used to remove the baked-on brake dust that was clinging to the 1552 Tarmac wheels that currently reside on my T5. With little more than a few squirts and little agitation with a soft hair brush the Tornado Red sheen of the wheels was soon back in attendance. No more invasive brake dust to eat into the paintwork here.  Thanks chaps! 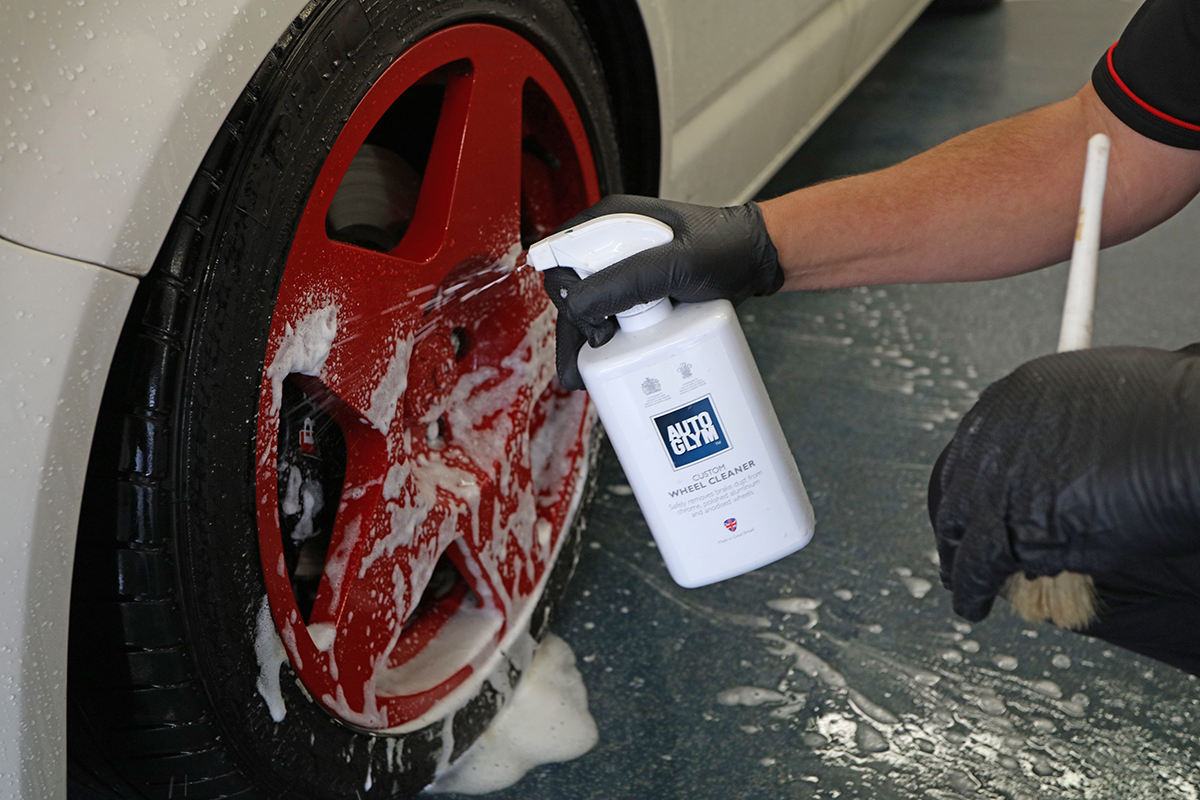 Custom Wheel Cleaner was used to remove most of the baked on brake dust and road contaminants. A soft hair brush was again used to agitate and remove the grime

Last but by no means least, Martin set to the interior headlining of the cabin. Using some diluted Interior Cleaner on a soft chamois cloth the dirt that he managed to get out of the fabric was incredible. I literally could not believe the difference that the lads made to the van in just half a day, and even two weeks later it was still looking remarkably clean and tidy thanks to a quick and effective application of UHD Wax once I got the van back home.  Is there a better way to spend a couple of hours on a Sunday afternoon than with a handful of clean microfibres and a tub of wax?  I certainly think of a much more therapeutic way to while away a few hours. Yeah, so it’s only a van, but by heck it looked amazing once Autoglym had worked its magic that day. 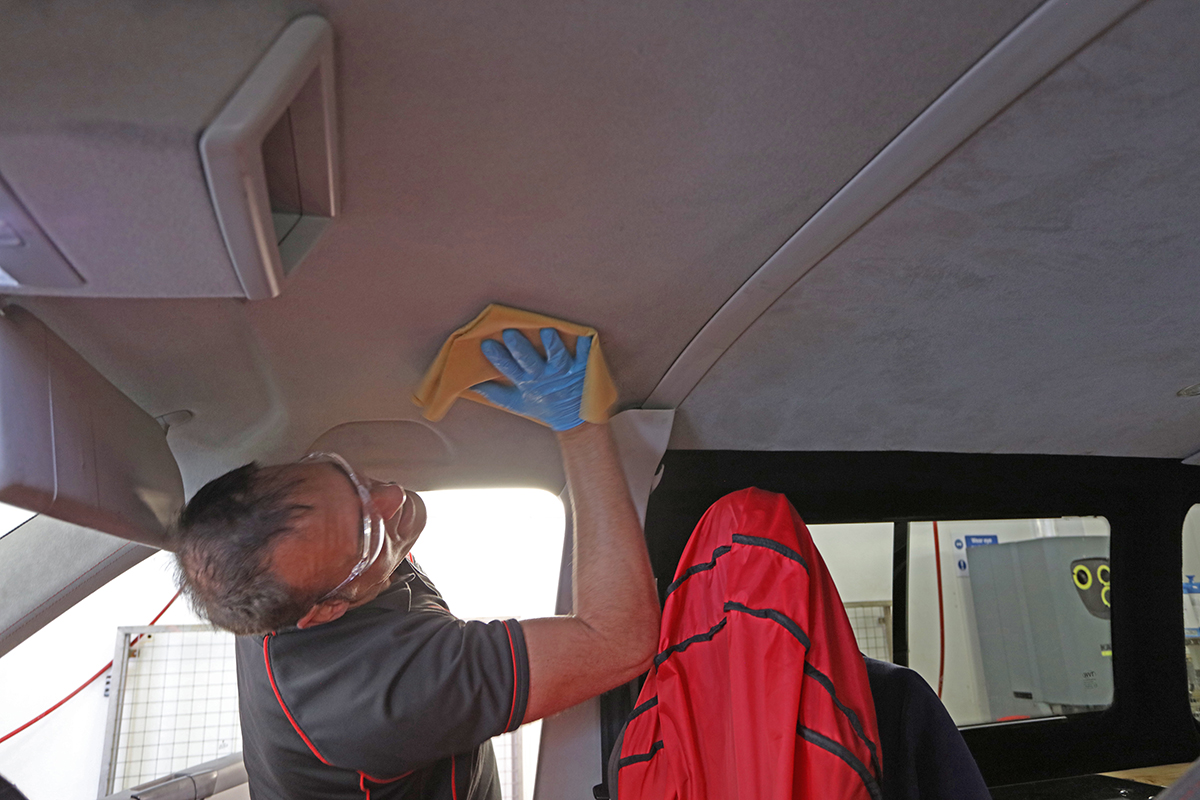 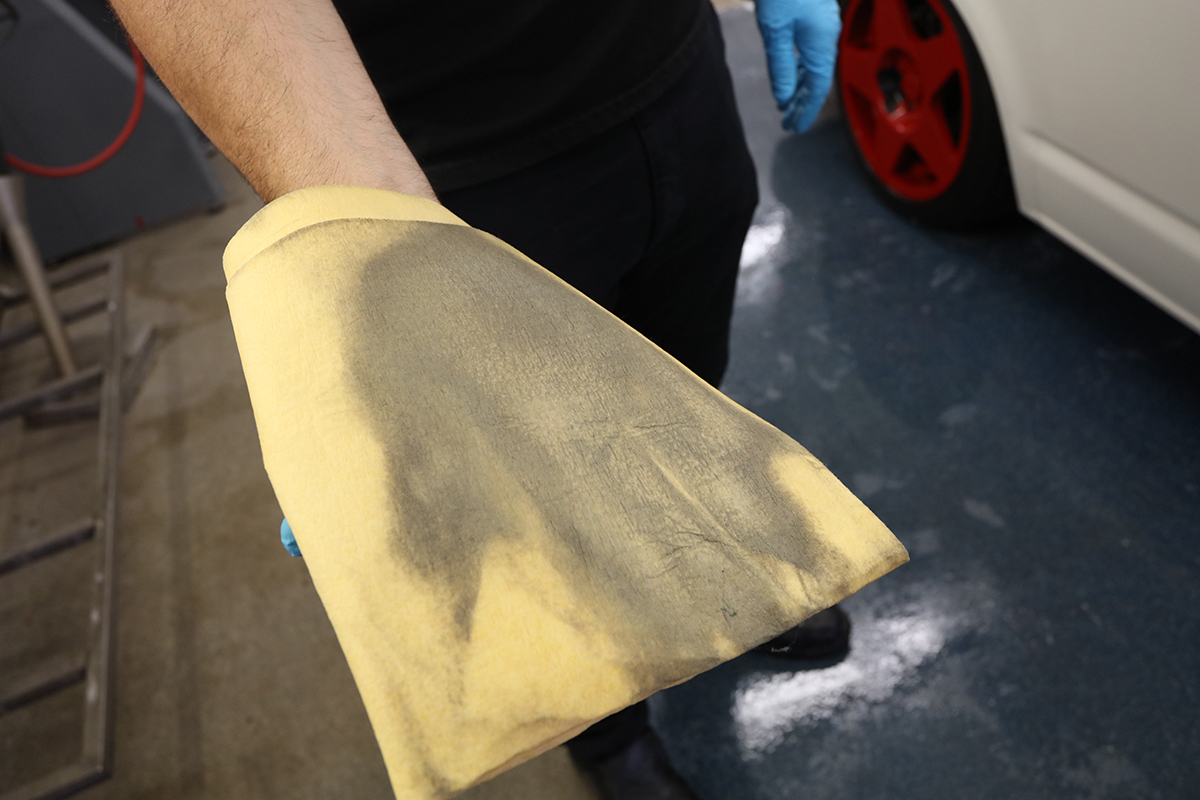 Just look at the dirt that was drawn from the headlining 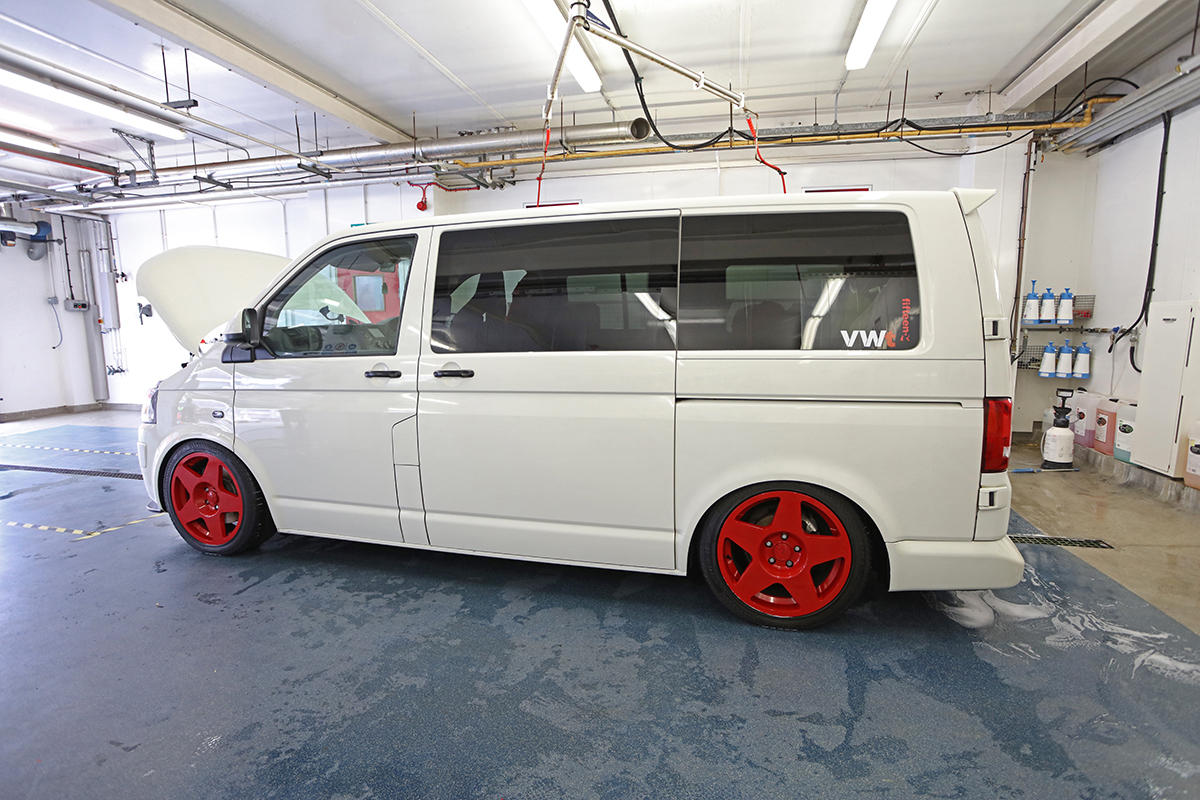 The end result was a fantastic transformation 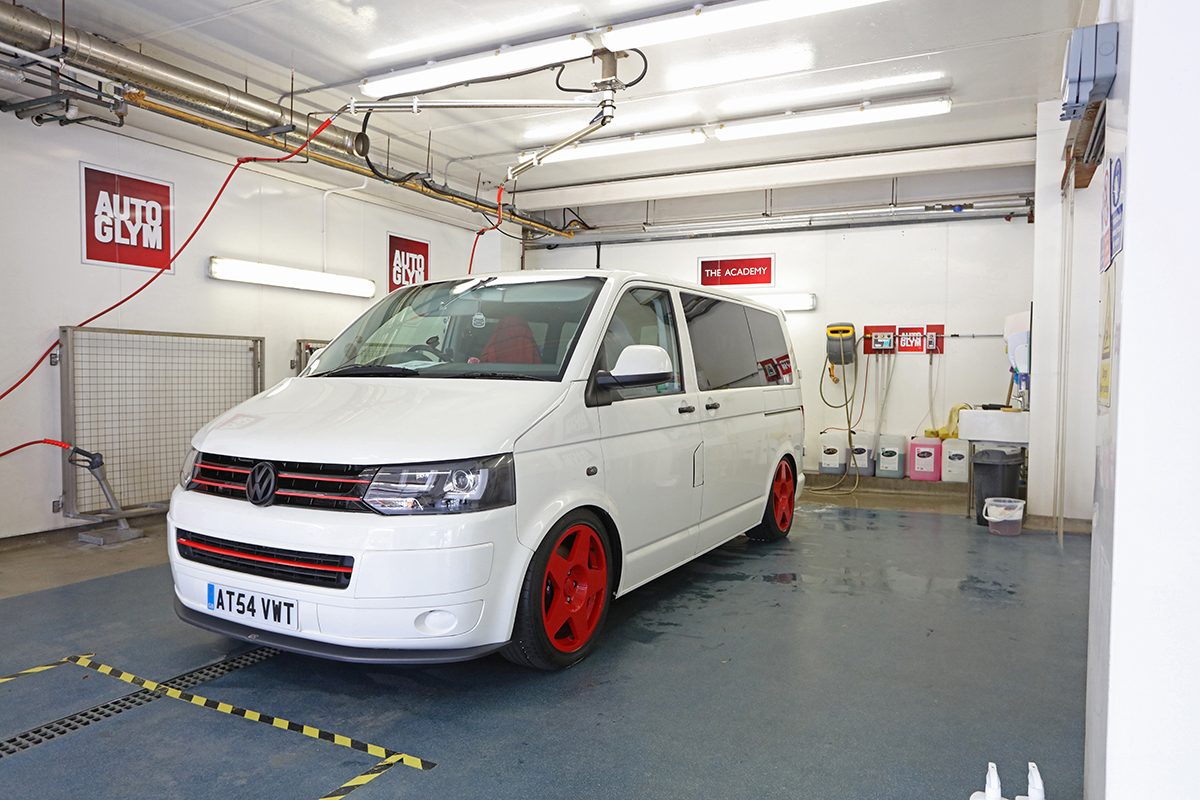 Ready to fight another day 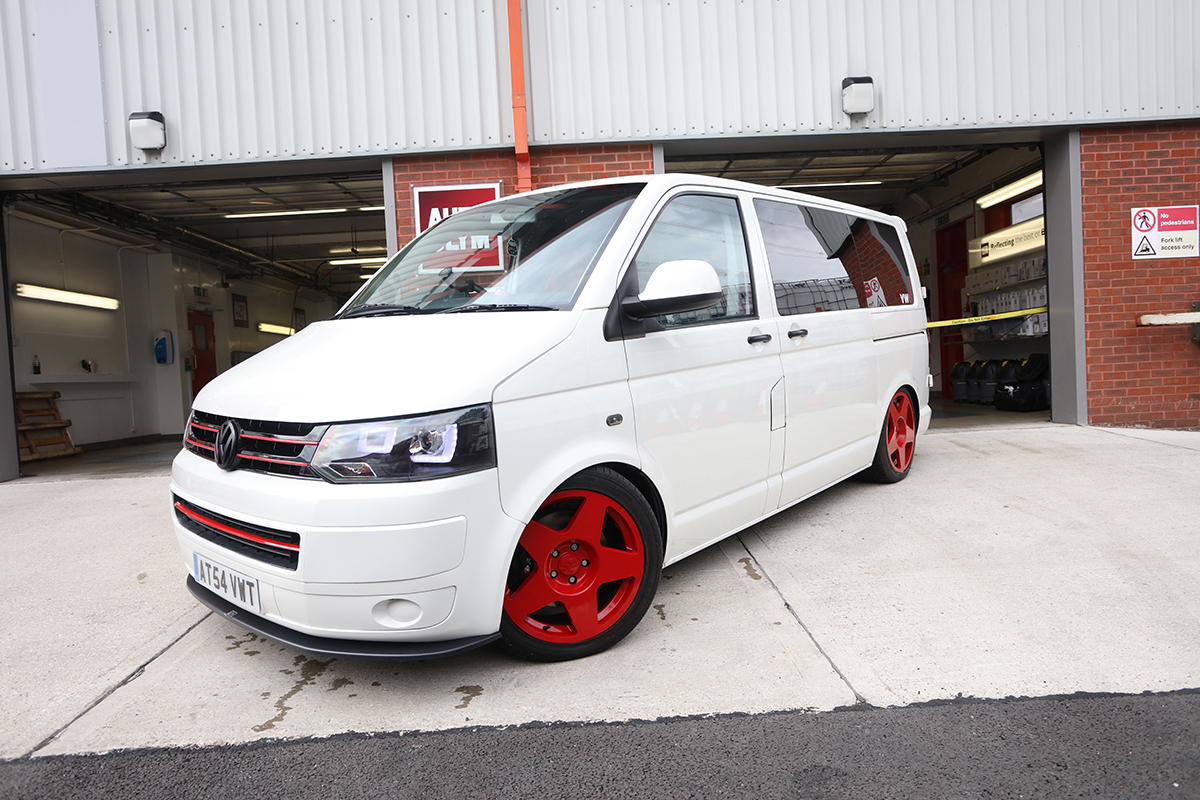 A truly stunning transformation for this 217,000 mile former builder’s hack

Thanks to James Wallace for the loan of the T5 to put this article together.